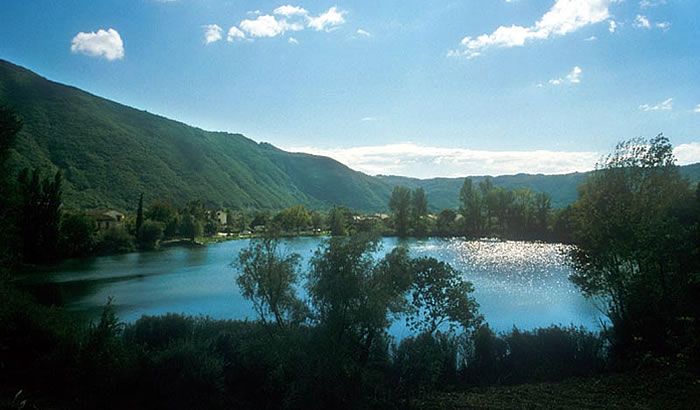 At north of Rome in the region called Alta Sabina, the largest water catchment area in Europe, the ancients had already placed the kingdom of the river water divinities and Pliny had nominated Nemora Vacunae, the Wood of Vacuna, the great expanse of sylvan mountains that were around the Lacus Cutiliae. Vacuna was the Sabine goddess of water, nature, forests and fertility, but she was also the goddess of rest.
In Nemora Vacunae there was a spring from which healthy water flowed that fed a lake called Lacus Cutiliae (today Lake of Paterno) where the medicinal waters of the spring created a particular landscape. The Lacus Cutiliae was still mysterious because you could not see where the water flowed and how it came out because you could not see rivers, today we know that the pond was fed by a flow of underground water that rises from its depth of 54 meters.
About Lacus Cutiliae also tells Varrone in a lost work and, ad a result of its geographical position in the Italian peninsula, he identifies it as umbelicus Italiae, epithet that has now passed to the city of Rieti, but the true particularity of Lacus is in the characteristics of its waters that still in the Archaic times they were affected by the presence of small eruptive vents that bring to the surface mud, mineral salts and gases from ancient volcanic ducts and can be linked to the more recent Sabatini and Albani volcanoes. Today these phenomena give life to the Salinelle of Paterno, a naturalistic site neglected at least as much as the Lacus Cutilae was preserved and a place of worship in antiquity.
Once the lacus Cutiliae was fed by a healthy and sacred source to the goddess Vacuna. At the center of the lake there was, as Varrone tells, a floating island formed by calcareous incrustations on vegetal residues, on which the cult of the Lymphae Commotiles was based.
Dionysius of Halicarnassus tells us that the island had a diameter of fifty feet (about 15 meters) and was no higher than 20 centimeters; Seneca, in the Naturales Questiones (III, XXV, 10) also provides an explanation of the mysterious floating island:
... therefore even if on the island there are some stones, you will realize that they are corroded and porous like those formed by a liquid that solidifies, especially on the banks of the medicinal sources where the suspended substances on the waters come together and the foam itsolidifies ; it's inevitable law in that is composed of wind and empty.
Macrobius tells how on the islet, that was formed on clods of mud slatted and on that had grown the bush, had been built by the people who had moved in the valley, the Pelasgi, a temple dedicated to Dis or Dite and an altar dedicated to Saturn to which human sacrifices were made. The myth tells that it was Hercules, while returning from Spain, to change the sacrificial rites in ceremonies in which to gods were offered anthropomorphic statuettes and lighted lamps.
In this floating island lived the Limphae Commotiles, lighter as the island on that they lived and whom Lucretius describes as sure traces of forms, which everywhere wander in thin tissue and can not be seen one by one.
They were gods related to spring waters, especially thermal and healing waters, and the Lymphae Commotiles owed their name to living in a floating island (cum moto ➝ in movement) and they were the oracular deities of the ancient Sabino people. Many questions arise regarding the origin of the word lympha that defines them and is unknown; it may have been Lumpa or Limpa, however related to limpidus, adjective that means "clear, transparent", and usually an attribute ascribed to the water ...