Trajan emperor and builder, the exhibition at Mercati Traiani 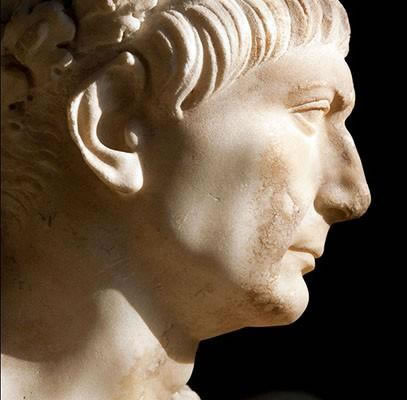 His contemporaries and ancient historians considered Trajan optimus princeps for his military skills and qualities as a ruler, modern historians consider him one of the best statesmen of all time. In November of 117 AD Emperor Trajan died and an exhibition was staged in the Forum, to that one he gave the name, to celebrate his greatness as a statesman and general man who brought the size of the Empire to the maximum expansion.The exhibition created at the Trajan Markets will remain open until next September 16th 2018; The exhibition held at the Mercati di Traiano will remain open until next September 16th 2018; on display statues, portraits, architectural decorations, casts of the Trajan's Column, gold and silver coins, scale models and three-dimensional reworkings of the architectural and engineering works that Trajan had made for war purposes but also for greater glory of Rome.
Trajan was above all a great leader, a general who loved his work; It is no coincidence that after the death of Nerva the Senate ratified his succession in 98 AD and he was in Germany, where as governor was busy sedating some revolts along the Danube limes, he did not consider returning until the situation had stabilized. Trajan went to Rome just two years after its ratification as emperor; as a true military leader of his people he did it not on a horse but walking in front of his legions: everyone could see him because he was much taller than most of his soldiers.
He was a soldier and came from a military family; his father had been one of the generals of Vespasian and Titus in the war of Judea and then governor of Betica and proconsul of Asia. But if his father gave him the attitude to the battlefields, his mother, who was a nephew of Quintus Marcius, consul suffix of 26 AD, introduced him into the system of relations of the Flavii court; to these genetic inclinations his personal qualities were added and this was the sum of the reasons that induced Nerva to name him his heir.
In his vision of the Empire, Rome was the driving force and its greatness was expressed not only in the civilization that led to the subjugated peoples but also in the magnificence of the city. The Urbe at the beginning of the second century had become a capital with almost one and a half million inhabitants and if the account does not consider only the cives and free men but also the slaves we can think of a city of over two million inhabitants , twice those during the Augustan age. The existing public buildings were no longer sufficient and Trajan then smoothed the hill that divided the Capitoline Hill from the Quirinale Hill and in that new space aligned with the Forums of Caesar and Augustus the largest complex that Rome had ever had was built: a Forum, a large square and along its sides was erected the Basilica Ulpia for judicial activities and trials, with the two libraries, Latin and Greek behind it, and then the long porticos from which you entered the south-west to the exedras with the censors offices and to the northeast to the largest macellum ever made, now known as Trajan's Market, a place where they could carry out all commercial activities.
Two monuments were raised in the Trajan Forum to celebrate the emperor: a large bronze equestrian statue of Trajan no longer exists (on the type that will later be built for Marcus Aurelius but three times larger) and the Trajan's Column which celebrated his victory over the Dacians and that even today everyone can admire.
The exhibition traces back the life of Trajan presenting evidence of his activity as legislator, conqueror, builder in time of peace but also in times of war and then trying to reveal a private aspect of his life as a man who had two side women, his wife Plotina and his sister Marciana, who had a leading role in hereditary politics, the first favoring the succession of Adriano and the second, linking the Antonini family to his descendants.
The exhibition was promoted by the Capitoline Superintendency of Cultural Heritage in collaboration with the University of Ferrara, the LAD - Laboratory of Studies on the ancient Danubian provinces of Ferrara and the Real Academia de Bellas Artes de San Fernando in Madrid.