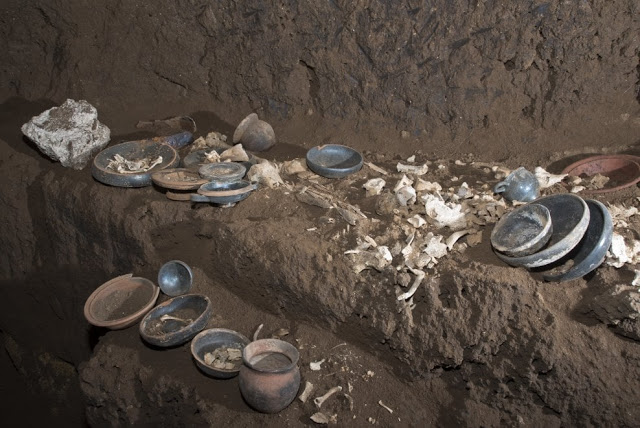 An inviolate tomb dating back to the fourth century was found in Rome along the Via Tiburtina, in an area where there was no known presence of that type; the exceptionality of the discovery lies in the integrity of the burial.
Last April, during the works for the new aqueduct in Case Rosse, a bulldozer hit a slab of stone that, breaking up, literally brought to light a tomb that had never been prey to looters and that the slab closing it has preserved from the penetration of earth. This is a tomb of chamber type, 3.30 m long, 2.50 m wide. and 1.75m high. and had been dug into a tufa bench.
Access to the tomb was from a well 1 meter wide and 2 meters deep, with rudimentary steps. Four skeletons were found inside; two were lying on the lateral planes similar to funeral beds with beside the funeral kit composed of pottery containing the offers for the last trip. In all there are 25 finds in almost perfect conditions, plates and ceramic vases in "black paint" on which were bones of kid, lamb, rabbit and chicken and even a coin, the one the deceased had to give to Charon to cross the Styx and arrive in Hades.
Archaeologists were able to give an initial indication on the dating of the tomb from the type of ceramics and from the coin engravings. The coin on the “recto” has impressed the head of Minerva while on the “verso” a horse head with the inscription “romano” whose meaning that currency was of roman people.
This coin was minted when Rome began to trade with the peoples of southern Italy and therefore referable to a period between the fourth and the beginning of the third century BC, a date confirmed by the black-painted pottery that first imported from Greece, it was then produced by italic artisans.
In some newspapers the tomb was also referred to as the "Tomb of the Athlete" because among the objects of the funeral equipment were found two strigils , which were particular metal tools that athletes used to remove the sweat from the body. However, this instrument was also used by the people who frequented thermae and balnea and that seems the most probable hypothesis brcause the buried men were between 35 and 50 years old, therefore older men and more easily inclined to curative and hygienic practices such as stay in the calidarium for the steam baths rather than the physical efforts of the athletes.
Strigils use connected to the steam baths also provides an important testimony, or already at the end of the fourth century even in the suburban areas of Rome villae rusticae had balnea, so a century before assumed until now. Moreover, we can not discount the hypothesis that strigils were used not at home but at hot springs of nearby Albula where Augustus also went to be treated and whose attendance is attested since the IV century BC.
Strigils were an instrument that already used Etruscans and Greeks even if the employment that is most often remembered is that one of the athletes who used it to remove from the body the oils that spread themselves before competitions; in fact it was also used to remove sand or sweat from the body after hot baths or duels.
The burials seem to have happened at different times, first the two men lying on the sides and then in later moments the other man and the woman lying on the bottom of the room.