Pompeii: new fresco with Leda and the swan 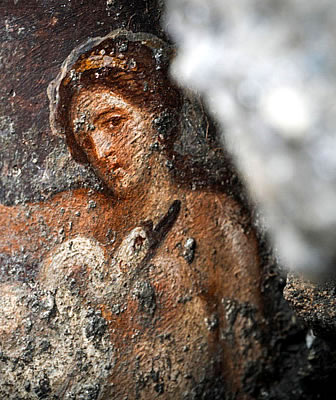 In Pompeii, another marvelous discovery was made during the excavations in the Regio V in a domus located along the road in the direction of Porta Vesuvio where, removing the layers of ash, a cubiculum frescoed wall appeared with a depicting of Leda and the Swan myth.
The fresco portrays the moment when Zeus, hidden under the guise of a swan, manages to have a sexual relationship with Leda, wife of the King of Sparta Tyndareus at that moment away from the city; in one of the myth many versions, the beautiful Leda walking along the banks of a pond sees flying a swan chased by an eagle and protects it by hiding under her mantle as the bird sits on her lap.
The swan stuns she by spreading scent of ambrosia and caressing with the neck all over the body causing her to surrender; the same evening Leda will have also a relationship with Tindaro and at the end of these loves Leda will give birth to two eggs: from one egg will be born Castor and Pollux and from other one Helen and Clytennestra, Pollux and Helen sons of Zeus and Castor and Clytennestra sons of Tyndareus.
Myth of Leda and the Swan was a very common theme for decorating the Roman domus; in the same Pompeii there were images of Leda with the Swan already in the domus of the Citarist, in the domus of Meleager, in that of the colored Capitals and in other ones.
The Romans called the bedrooms cubiculum and in the wall of a cubiculum was painted the winking image of Leda during the embrace with the swan; to this cubiculum you arrived after crossing the atrium, the central room of the domus, which the fauces (corridors) connected to the vestibulum or the entrance to the house. In these fauces, where it was excavated in recent months, another particular fresco was found: a Priapus in the act of weighing his penis on a scale.
Priapus was the god of male vigor and its representation was linked to fertility auspices. In Pompeii there is also another fresco in which Priapus is depicted in the act of using the scales and is located in the famous House of the Vettii.
The presence of these subjects clearly allusive to sexual life was normal because to the sexuality were bound some values to be indispensable for a patriarchal culture such as the Roman one and for which the man had to demonstrate authority and power in all aspects of his life.
Isn't coincidence that the word "virility" that derives from the Latin term "vir", or man, is used today to indicate both physical prestige and strength of character as well as sexual performance. The Roman man had to prove his superiority and in this sex was one of the many manifestations of life full of positive values that became negative with the affirmation of Christian morality.
In the Roman domus the cubicula were therefore environments in which not only did they sleep but sexual activities took place and where the erotic figures on the walls were propitiatory, also because the themes often involved the gods that as a sexual life were a spur and example .
The newly discovered Leda and the swan presents also a very sensual iconography and, according to the Director of the Pompeii Excavations, the model could be that of Timptheos's Leda, a Greek sculptor active in the IV century. B.C. and of whose statues some Hellenistic and Roman copies have been received, such as the one exhibited at the Capitoline Museums in Rome and also the headless one, although beautiful, which can be admired at the Archaeological Museum of Formia. The detail that brings the Leda of fresco to that one of Timotheos is the gesture of raising the mantle to protect the swan that chased by the eagle sought shelter with her and the sculptor influence would be seen in the detail of the drapery very similar to that in Nike of the temple of Aesculapius in Epidaurus, attributed with certainty to Timotheos.
The myth of Leda was represented, at least since the sixth century BC, with many variations that flow in two iconographic archetypes, one in which Leda is next to the swan and the other where it joins to it; the fresco just discovered presents Leda as it joins the swan and the vividness of the colors and the plasticity of the shapes that the technique of fresco allows, provides for this representation the particularity that gives exceptionalness to the discovery.
The fresco can be classified as belonging to the fourth style of Pompeian painting, as seems to confirm the use of bright colors and wisely blurred, both because it is believed that the house was undergoing a restructuring to remedy the damage of the earthquake of 62 d.C. and it is therefore likely that the committed artists had adopted the criteria of the post-august style, both for the way in which the mythological theme was treated. In fact, even if the inspiration came from the great examples of classical Greek art, the Pompeian artists gave their own free interpretation on which the environment nfluenced the way in that the work was carried out, but also the purpose that it should have for the client. Just the application of these criteria in the realization of the frescoes has meant that in Pompeii there are not two equal representation of the theme that in painting represents sexual initiative. At the same time this suggests a possible interpretation of the erotic high charge of this Leda not only to decorate the wall of a bedroom but to suggest fantasies for a pleasure-seeker landlord as well as very rich.