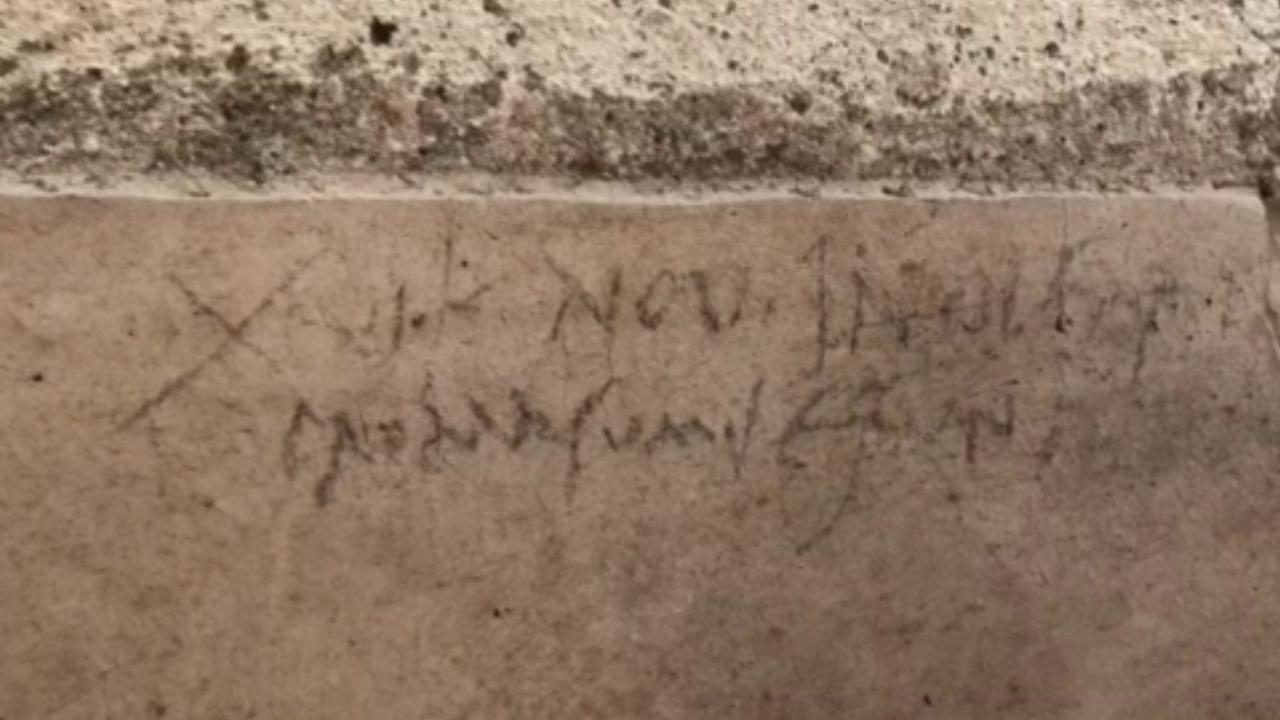 An inscription found during the excavations underway in the Regio V tells that on October 17 of 79 AD. the inhabitants of Pompeii were living a normal day. It is an exceptional discovery because it carries on two months the date of the eruption of Vesuvius, which was commonly accepted as derived from the letter of Pliny the Younger to Tacitus. That 17 of October of 79 d.C. a worker was working in a cubiculum adjacent to the atrium of the Domus with Garden and left a note in charcoal on the wall where he would then perhaps have to make frescoes similar to those found in other rooms, and that would then cover it. How often were the graffiti was just a cheerful note:

After a few days the writing would have disappeared under a beautiful painting but there was never more time. Seven days later, on October 24 took place the eruption of Vesuvius although in the epistle of Pliny the Younger to Tacitus is clearly stated on August 24 of AD 79. Why?
Pliny the Younger had witnessed the eruption from the domus of Misenus where he lived with his uncle, at that moment commander of the Roman fleet; he was studying while Pliny the Elder, to bring aid to the matron Rectina and other inhabitants of the domus at the foot of the mountain from which protruded thick smoke, he put quadriremes into the sea and himself stood at the helm and led them towards Stabia considering it more sure because it was on the gulf side farthest from Vesuvius. In the epistle Pliny the Younger indicates the start date of the event, "The ninth day of the calends of September" which corresponds to August 24th. Now the newly found graffiti moves the eruption date by two months; but how could Pliny the Junior have reported a wrong date?
The answer could be in an error committed by a medieval amanuensis who in writing the code, through which the letters of Pliny the Younger have arrived to us, may have confused September with November. Already the philologists were divided because if in the most accredited codes one could read nonum Kal. Septembers which refers to August 24, in other sources of the works printed in the '400 and' 500 was reported Novemeber Kl. referring to the autumn.
The graffiti with the date of the sixteenth day before the calends of November, has been identified in the domus called the Domus with Garden where they were undergoing restoration work almost certainly for the damage caused by the earthquake of 62 AD. that had caused much damage throughout the city including the collapse of the nearby Porta Vesuvius that is also represented in the low relief in the Lararium of the domus of the rich banker Lucius Cecilius Iucundus.
The new epigraphic testimony confirms the hypothesis that some scholars had already advanced in the 1800s after the discovery of the charred finds in the braziers found in the Domus of Menander and in that of the Chaste Lovers of branches of autumn berries and that had to be warmed up to mitigate the temperatures that were becoming stiffer. In addition, a large quantity of pomegranates were found at Oplontis put to preserve for the winter between four layers of intertwined mat; in Boscoreale then the harvest was over and in a yard of a rustic villa were found a large number of dolia for must already closed.
Only certainties for a coin that was found among the cinder, a denarius that was coined in September to celebrate the XV salutatio imperatoria of Titus, which occurred after September 8, 79 AD.
With this ceremony the legions acclaimed their commander and asked the Senate that this honor should be recognized; this acclamation in particular happened by the decurions of Munigua a city of Betica and to them the same Titus refers in an edict of 7 September 79 d.C.
From the Domus with Garden located in the "Vicolo dei Balconi" and that has already given some marvelous wall frescoes, the archaeologists expect other discoveries because it seems possible to reconstruct a frescoed vault because a ceiling of cane was found on the floor with many fragments of plaster splitted under the weight of the ash.