Discovery Historia of Seneca in a papyrus of Herculaneum 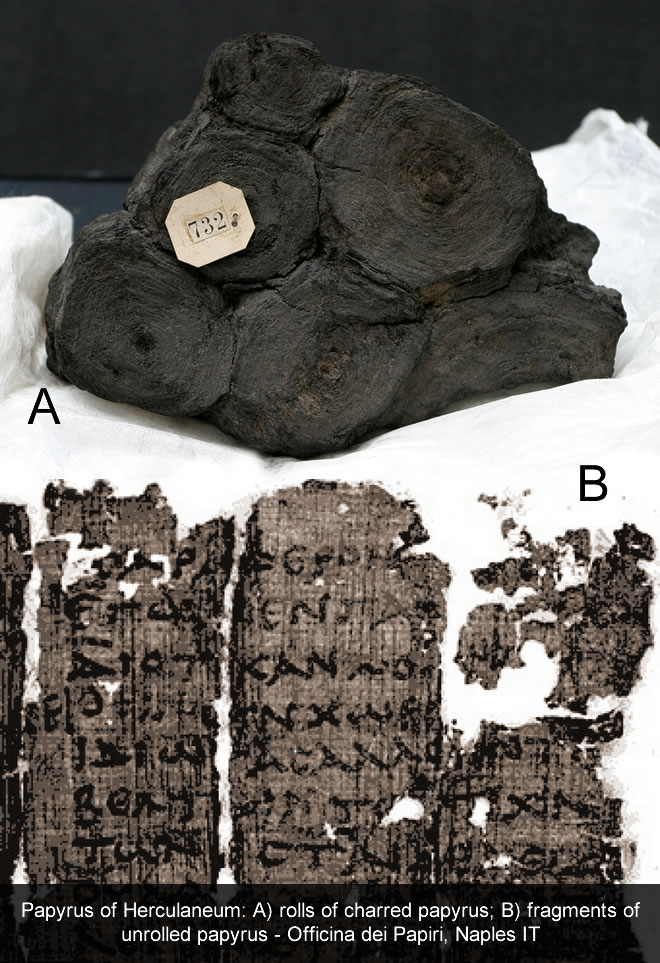 A new technology and the expertise and patience of Valeria Piano have given back to the world an important text by Anneo Seneca the Elder: "Historiae ab initio bellorum civileum", a historical work related to events from the period of civil wars to Emperor Tiberius, probably the last work written by the historian who died in 37 AD; until today expected the work lost instead it was hidden among the charred papyri in the library of the Pisons Villa in Herculaneum.

The researcher spent long hours in the reading room of the National Library of Naples studying the papyrus PHerc 1067 with the new multispectral technique - at the time elaborated by NASA for the analysis of interplanetary images and introduced in the Workshop of the Papyri since the nineties of the last century - which allowed to identify a greater number of letters and arrive at the correct identification of the content.
The multispectral technique is successfully used above all of the papyrus in Latin, but they represent only 10% of the papyri recovered until now from Pisons Villa.

The papyri in Latin presents better preservation conditions also for the best quality of the support and for the greater calligraphic care with which the texts were reproduced following the technique that the scholars define "laid writing". The papyrus Pherc 1067 is written in Latin, in what the philologists define the Archaic Latin not only for the style of language but for the writing techniques employed by the scribes.

The Villa of Papyri was a splendid maritime villa that Lucius Calpurnius Piso Caesoninus, father-in-law of Julius Caesar, had built in front of the Bay of Neapolis. It was a very large complex that developed in line with the coast for 250 meters and consisted of four different cores: a) a central body in which was the atrium, access to the villa, the tablinum and a square peristilium on which overlooked the room considered the filing cabinet of volumina; b) an eastern wing partly still to be excavated; c) a large rectangular peristilium; d) some structures placed to the west that ended in a round lookout from which to enjoy the view of the sea.

The villa was discovered in 1738 expanding the excavation area of the city of Herculaneum, although it is improper to define excavations those wells so much similar to those of the mines through which the men descended in depth until they achieved the tunnels formed in the rooms of the villa that the ashes had not filled. Only in 1985 began the excavations in the open air, taken up several times in the following decades and allowed to see the atrium with the square peristyle and some surrounding rooms where there are frescoes and mosaics.

In the last century, by the drawings of the villa made during the XVIII century excavations, billionaire collector Paul Getty built an identical villa in Malibù, California, the same that today houses the Paul Getty Museum and above all provides a verosimilating image of the splendor of the Villa of Papyri.
The ashes of the eruption of Vesuvius on 24 August, 79 d.C. invested the villa that was covered by 25 meters of materials at a temperature that was calculated between 300 and 320 degrees on the Celsius scale; the materials completely covered the villa found by chance during the excavations at the time of the Bourbons.

A peristyle with over sixty columns was identified that surrounded a vast pool towards opened up countless rooms, elegantly decorated. In those rooms it was excavated from 1750 to 1761 when poisonous elders forced to interrupt the research that had led to the discovery some splendid sculptures in bronze and marble, in Greek and Roman style that today you can admire at the Archaeological Museum of Naples and of which the most well-known are the 5 bronze statues of the Danaids that in the 18th century Winckelmann defined as "The dancers", the two runners and the busts of Greek poets and philosophers.
During these researches a considerable number of charred pyrites were found in several environments, which at first the excavators exchanged for pieces of charred wood but then realizing that they had a regular shape, brought them to the excavation director. Since then start the recovery of the papyri that were scattered in several rooms of the villa: Some were piled on the floor, others were placed in shelves, others stored in a cabinet and others closed in wooden crates. In the end, according to the testimonies of the time, around 1800 papyri were recovered and the attempts to unroll and read them began.
The extreme fragility of the rolls and rather empirical practices have caused the loss of many papyri at least until the beginning of the nineteenth century when some papyrus were unrolled with a technique called " scorzatura "and the fragments placed on supports that have mostly allowed the partial reading of the text.

The papyri of the Pisons Villa have brought to light many works that were considered lost forever; from the treatise on the Nature of Epicurus - of which the papyri of Herculaneum revealed seven books out of the total of 37 of which it was composed -, to the most ancient speculum principis that Philodemus of Gadara dedicated precisely to his protector Lucius Calipurnus Piso Caesoninus, to the Carmen De Bello Actiaco attributed to Rabirio, a poet from the Augustan age, who recounts the fall of Alexandria and now this work by Lucius Anneo Seneca the Elder who could provide new information on the passage from the Republican age to the imperial age of which the author was a direct witness. But many other works are waiting to be found and moreover the number of voluminas in Greek (90% of the papyri) suggests to the archaeologists that the Latin Library must still be found because, as it was customary since the last republican age, all libraries Romans kept the writings in Greek separately from those in Latin.
The importance of these papyri is such that some universities have instituted their study as a branch of ancient history, the Herculaneum Papyrology because "... the Herculaneum papyrus contain works composed between the IV and the I centuries BC and transcribed between the III cent. BC to I century AD: therefore, they relate to a total of five centuries. Moreover, they are a direct expression of cultural life not of an area (...) of the ancient world, (...) but rather (of) the very center of the ancient world"(ref. Mario Capasso).