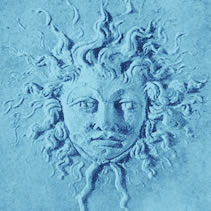 In 1917 occurred some landslides along the railway line coming out from Termini towards Cassino, near Porta Maggiore opened a chasm in which collapsed a large amount of land. It came to light of a long corridor going downhill and after removing the land that was blocking it was discovered that continued to fall up to a vestibule which opened into a large basilica hall of over 100 square meters. The monument immediately fascinated archaeologists and art historians for the mysterious character and esoteric meanings of architecture and decoration.
The building dates from the first century BC and it was built in an area where were property of the gens Statilia; it was not yet possible to determine whether the manufacturer was Titus Statilius Taurus, General Augusto (who defeated Sextus Pompey in 36 and routed Antonio's fleet at Actium), or the great-grandson Titus Statilius Taurus (with the same name) and father of Statilia Messalina, the third wife of Nero, who committed suicide in 53 AD because he was accused by Agrippina to practice magic; However, from dating of some interventions is supposed that the second Titus has made changes to the basilica built by his predecessor. Over the restorations it has been possible to study stuccos and frescoes; the three naves which constitute the main body of the basilica show whitish stuccos with a contaminated from blue pearl effect obtained with "Fritta or Egyptian pasta ", a mixture of quartz crystals, glass, copper carbonate and calcium carbonate heated at very low temperatures used in the Augustan age; in the vestibule they were made instead polychrome frescoes which resembles the walls of the Domus Aurea and then later period.
The attribution to Statilii of the construction of an underground Basilica which devote mystery cults is absolutely plausible since their mysticism was well known and confirmed by the discovery of a funerary urn with representations of the Eleusinian Cult and they given appellative of "Mystes" to their freeman and to their son who died young.
Statilius Taurus was a man of power in the Rome of Augustus and also very rich, was in fact he who built the Taurus amphitheater, near the Circo Flaminio, in 29 B.C., effective consul in 26 A.D. and for many years prefect of Rome - was in fact the vice of Augustus when this was not in Rome.
Statilius Taurus was part of a neo-Pythagorean Agape, a group of 28 followers who were led by Senator Nigidius Figulus. Nigidius Figulus was an eminent politician of the last Republican era, sided with Cicero against Catiline, and great erudite who wrote about grammar, theology and astrology; already his contemporaries believed that he was a great expert in Etruscan discipline, or in the divinatory arts of which has left writings that relate to the reading of the bowel or the interpretation of thunder, while he was also studious of astronomy so that from its analysis of the movement of constellations derived its name Figulus, which means potter, in fact he used to compare the movement of the stars to that of the potter's wheel.
The Neo-Pythagorean movement was distinctly religious and its foundations were the dualism of world and God, of flesh and spirit, whose relations were mediated by spiritual forces in a way towards a revelationof transcendent human reason.
The neo-Pythagoreans believed that there were three types of people: God, man and man Pythagorean; the latter was a special man capable of being an intermediary between the common man and God for his spiritual strength and ability to dominate nature and understand it from the inside. Another cornerstone in the neo-Pythagorean doctrine was metempsychosis for which a life lived with merit approaching God and so many lives could be the first to reach God; in practice this philosophy dictated the rules of life that were intended to develop harmoniously body and spirit in a growing assimilation to the divine person.
Important names members of the Roman group of neo-Pythagoreans , besides their guidance Nigidius Figulus were Sotion of Alexandria and Fabianus Papirius, both masters of Seneca, and Quintus Sextius the founder of the School of Sestii who from neo-Pythagoreanism drew the foundations for the Roman Stoic doctrine that led back to the principles of the thought and of the life to the Roman mores based on the strength and moral energy ...