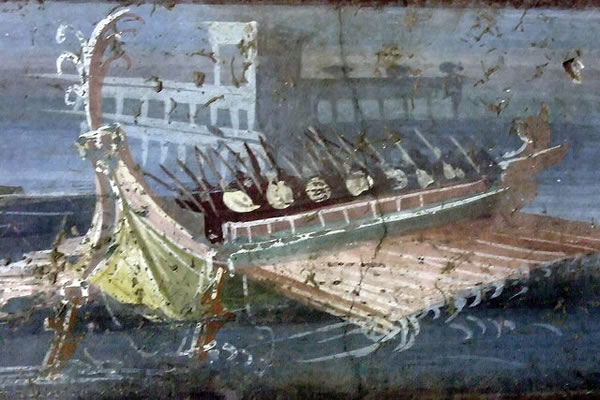 The Naumachia was the battle fought in the water; the term was used to indicate the clash that took place in the water, then it was used to indicate the reconstruction of the most famous naval battles and finally the name was also borrowed from the fixed or mobile structures, where the event took place.
It seems that originally the Naumachia was only an exercise that the Roman generals decided to organize in closed basins as training for the legionaries in view of the clashes with Carthage.
The first celebratory naumachia of which we have news is that organized by Julius Caesar in 46 BC. To celebrate his triumph, the dictator had built a temporary basin using the natural depression of the land in the area called Codeta Minor on the right bank of the Tiber. The Campus Codetanus was one of the three flat areas that were located in Transtiberim and Codeta Minor was that part under Caesar's Horti; the Campus Codetanus was in front of the Navalia, just beyond the Prata Quintia, or the area in that part of Trastevere that today could be identified as the area where the Porta Portese market is held every Sunday. According to Festus Avienus

Codeta appelatur ager Trans Tiberim quod in eo virgulta nascuntur ad caudarum equinarum similitudinem.
The field beyond the Tiber was called Codeta because there grew plants similar to the tails of horses.

Suetonius tells that Caesar to obtain the reservoir did make a ditch digging with spiral pattern to a depth of 10-12 meters. In this naumachia about 6,000 men were engaged to represent the clash between a Syrian fleet and an Egyptian fleet. Due to its proximity to the river it is believed that at the end of the event the waters over time would end up dispersing into the Tiber. The pit after being emptied remained so until 43 BC when it was again filled with earth and then leveled.
One of the most impressive Naumachias was the one organized by Augustus to celebrate the victory of Actium and of that he himself made the tale in his testament Res Gestae:
… Give to the people a show of naval battle beyond the Tiber, in a place where Cesari wood is now, after having dug deep for 1800 feet (533 m) and in width by 1200 feet (355 m). Thirty rostrata and bireme ships, and even more so for the smaller ones, engaged the struggle each other in this place. In these fleets, in addition to the men of the crew, they fought about 3,000 men.
Archaeological evidence has been found of this naumachia, in fact it seems that it also had part of the fixed structure as remains of travertine walls and pavement have been found. The space occupied by the basin extended into the area to that we will be able to give as present borders on one side the Church of San Francesco a Ripa and on the other side the Church of St Cosimato.
To fill the basin, Augustus also built the Aqua Alsietina aqueduct so called because the water came from Lacus Alsietinus, now Lake of Martignano. For the hydraulic functionality a drainage channel was also built to drain the water towards the Tiber at the end of the shows but it was also useful to let the ships enter; above the canal the Pons Naumacharius was built that was used by the spectators to reach the various entrances; the bridge was a wooden swivel structure that was destroyed in a fire and was later rebuilt by Tiberius. The Naumachia of Augustus was also used by Nero and then by Titus and still existed at the time of Septimius Severus.
The Naumachia was a very special show and in Rome it was possible to realize it due to the presence of two physical characteristics that made it possible: some depressed areas of the river that could receive the water that had to be drained at the end of the show and a large availability of water that for the first Naumachiae was taken by the Tiber while after the construction of the aqueducts, it was taken directly from these.
The Campus Martius was always considered the best site to carry out the Naumachiae because it was a natural depression in that it wasn't necessary to dig very deep and also there were many springs that could feed the basin solving the inevitable dispersion of water that occurred in the period of use.
Other naumachias of which we have certain news are those wanted by Caligula who chose to do them in the Vatican Circus, an area considered easier because was in proximity of the Tiber; according to tradition even Tito would have made a naumachia, which represented a clash between Corinthian and Corcyrian people , the place chosen was the Colosseum