Municipalities and symbols of Romanita 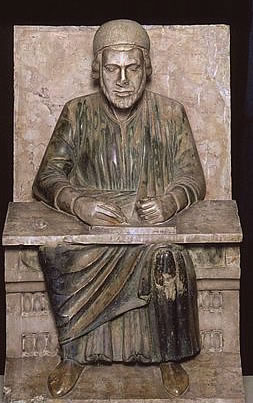 In the twelfth century, but already during the eleventh, the cities that were becoming municipalities felt the overwhelming need to legitimize their own institution and then went in search of their origins. But the origins must be noble and therefore the roots must go back to antiquity, and if Rome was founded by the heirs of Aeneas, then the cities of the Italian municipalities must originate from the same mythical history.
Some cities were more fortunate than others because they had given birth to illustrious Romans, so it was for Mantua, the birthplace of Virgil, for Sulmona where Ovid was born, for Padua, the birthplace of Livy and for Como from which Pliny the Elder and his nephew Pliny the Younger came. that sought the remains of their fellow citizens to make them civic monuments.
Mantua shielded the fame of its fellow citizen against the claims of the Canossa Margraves and dedicated to roman poet, in the 12th century, a statue with the dress of the judges of the time and placed it on the facade of the "Palazzo del Podestà".
Pavia, claimed its legitimacy in another way: the city chose as its symbol the "Regisole", a Roman equestrian bronze that came from Ravenna, very similar to the statue of Marcus Aurelius, and which testified to the historical rank of the city being Papia - as Pavia was called at that time - the capital of the Longobard Kingdom formed after the fall of the Western Roman Empire. The statue was the demonstration of the importance of Pavia as a continuation of Rome and the neighboring cities knew this well, so much so that Milan in 1315, during one of the many clashes, it raped and broke into several parts. The people of Pavia went to look for it, found the pieces and reassembled and covered it with a gold leaf. Even the Jacobins in 1796 raged against the ensign of city freedom but the pieces were so many and so dispersed that wasn't possible to reassemble it.
Of the statue remain the drawings of Leonardo da Vinci who took it as a model - together or perhaps instead of that one of Marcus Aurelius - for the equestrian statues commissioned by Ludovico il Moro, but never realized. Today in Pavia there is a statue erected in 1938 in memory of the original.
Siena, on the other hand, founded its origins completely in myth by inventing a founder called Senius, son of Remo, who gave his name to the new city. After the killing of his father, Senius fled from Rome taking with him the Capitoline Wolf which also became the symbol of Siena. This mythical origin allowed the citizens of Siena to "boast" because not only did the city have a history as long as that of Rome but its birth was "pure" as it was not stained by the blood of fratricide.
Perugia found its founder in Eulisteo escaped from Troy and brother of Aeneas; the story is told by Boniface of Verona who for 25 florins also wrote an Eulistea, following the model of Aeneid. But the Perugians do more: the founding hero appears in the Fontana Maggiore, by Nicola and Giovanni Pisano, in a bas-relief of the upper basin between the Archangel Michael and the Captain of People.
Venice too claims its founder comes from antiquity and finds him in Antenore, a prince who fled from Troy in flames like Aeneas. Antenore led the Enothetes allied with the Trojans, who later became Veneti, and are also mentioned by Homer. Antenore legitimizes the title of Venice as the second Rome and so as Mediterranean's Lady.
What about Pisa, the powerful maritime republic that could not establish itself as a contemporary of Rome and then chose a direct path: it embellished its civic monuments with spolia of Rome as in the cathedral where it has been shown that the three capitals with eagles and winged lightning come from the Baths of Caracalla as well as the large frieze with dolphins that comes from the Basilica Neptuni in Rome. These elements were clear political symbols that manifested the city's ties with ancient Rome, of which Pisa proclaimed itself the legitimate heir.
During the thirteenth and fourteenth centuries the interest in the antique did not diminish but it gradually changed; in the fifteenth century we want to understand the past and if the writers begin to decipher the inscriptions, the artists study ancient art to have models for the works of what will be the Italian Renaissance.