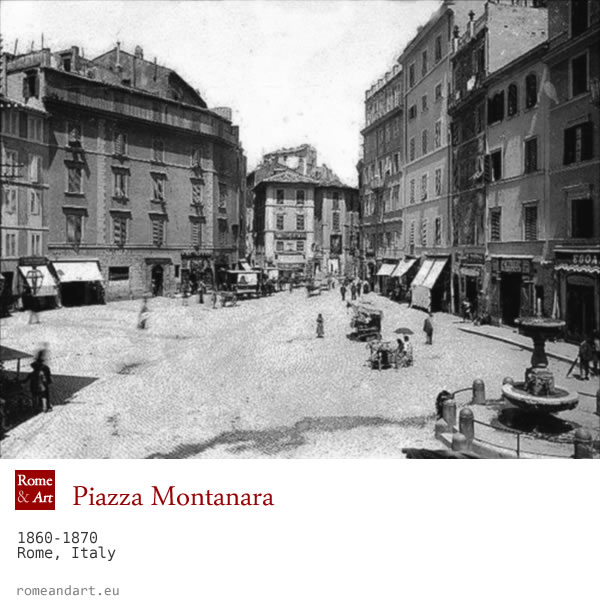 At the end of the nineteenth century the Rome Capital of the Italy Kingdom of changed its face. To make a new image in Rome some quarters were completely distorted: houses, churches and roads cleared, thousands of people deported outside the walls to give the city new monuments and try to recover the beauties of Ancient Rome.
To allow the vision of mythical Rupe Tarpea it was decided to release the Capitoline Hill of the houses along Via della Bufala, via di Monte Caprino and Via della Consolazione and of the whole popular district that occupied the entire area up to the Theatre Marcellus.
This was the case for Montanara Square, that was located where today is the initial part of the Via del Mare, and was bordered on one side by the Theatre Marcellus in whose arches were housed shops of artisans and some buildings with shops and taverns in the side until the Church of San Nicola in Carcere; from this church began Via della Bocca della Verità, a straight road that led to the church of S. Maria in Cosmedin.
When the buildings were demolished and the square disappeared, the "boors" who brought their goods to market and paesants looking for work moved ahead of Santa Anastasia, but henceforth the Rome of Piazza Montanara was over.
There was the horse market in the square, but also carts of street vendors selling fruit, vegetables and bread and small pizzas; among the sellers there was also a certain Michele Pantanella who, enriched during the famine of the mid-800s, he will first buy a furnace, then build the first factory in Via dei Cerchi and then in the twentieth century found the first real Roman food industry.
Still in the 800s in Montanara Square there was the market of the opere; the opere were the works in the fields, and the ringleaders arrived on the square to enlist the laborers. Around the square was a swarm of activities like that of the barbers "de la meluccia". These barbers put four or five chairs in a row along the wall and made shops in the open air; they were called "de la meluccia" because of the apple they put in their customers' mouths to stretch their cheeks to shave.
The square attracted people from the countryside and since many people did not know how writing, the desks had their desks near the workshops of the theatre Marcellus; some of them were also many requested for the beautiful love letters they knew how to compose:


Greet me, beautiful, the scribe:
I don't know him, and I don't know who he's.
To me it seems a sovereign poet,
So he enamored is of poetry.
For the narrow streets around the square was a flurry of activities of all kinds. Near Montanara Square, up the little ascent called “Via della Bufala”, there was the inn "der Bujaccaro" where was used to serve a steaming soup for a baiocco (ancient coin) and that was also the street Santaccia was there, she for a baiocco tried to give his thanks to more customers at the same time, almost she held the reins of a quadriga.
She was one of the attractions of the Square, so well known that the dialect poet Giuseppe Gioacchino Belli wanted to dedicate two ironic sonnets to her.

Santaccia was a lady from Corneto
as touching out of respct with gloves;
and how she'd like wood, fir or chestnut,
she knew give the rest to everyone.

But in Montanara Square, at the end of '700, it was also born the love, perhaps only platonic or maybe more carnal, of Johann Wolfgang Goethe for the beautiful Faustina Antonini, young Roman woman with velvet eyes, who lived in a grotto nearby Arco de' Saponari.
He had known her on his walks in the grassroot Rome when with his friend Tischbein he went to drink at the "Antica Osteria della Campana", that was at the beginning of the alley Savelli, where the sensual Faustina worked.
In the Elegies, Goethe recalled that love that remained in his mind and in his soul forever, so that later in the years, he wrote about her:

Here is Italy, which I already left!
Still the roads are dusty and beautiful is the country
but Faustina I don't find again: no, more Italy
this isn't what I left with dolor …
Even the first public transport service started from Montanara Square; it was the year 1845 when a horse omnibus connected Montanara Square to the Basilica of Saint Paul outside Walls.
Montanara Square was frequented by the populace and the dispossessed and after 1860, when the King of Naples Francesco II took refuge in Rome, the soldiers dismissed from the Kingdom of Naples and the adventurers took the habit of meeting also them in Montanara Square. In a rapidly changing world, soon laborers, ex-soldiers and adventurers were hired for raids in the former Kingdom of Naples; today those would be considered military guerrilla actions.
The groups were formed in Montanara Square; the men received weapons, food and 20 baiocchi and then were guided by the papal guards towards the border with the Kingdom of Naples. Thus the brigand bands were formed that would infest the center-south of Italy until the early 1900s. But something is left of Montanara Square: the fountain that was on one side of the square and was designed by Giacomo Della Porta at the end of the sixteenth century and then remodeled several times. When in 1930 Montanara Square was canceled to make way for an crossroad, the fountain was first transferred to the Giardino degli Aranci on the Aventine Hill and then in 1973 finally settled in the small square of S. Simeone at Rione Ponte.