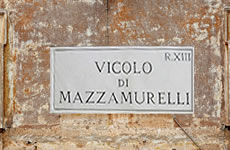 In the Trastevere district there is a narrow and short road that you meet by turning the corner after the Church of San Crisogono, closed by the walls of two tall buildings, allows you to reach the small eighteenth-century Church of San Gallicano at the bottom; Mazzamurelli have always lived in this place so much that they have the honor of a street with their name: they are capricious spirits of the houses elves .
The stories of Mazzamurelli have always been handed down orally and sometimes have been completely transformed; in the sixteenth century the news that a house in the alley was inhabited by spirits spread and the populace preferred to avoid passing through it.
In the nineteenth century, as indicated in a guide on the streets of Rome, in the alley lived a man of the underworld who pretended to be a magician and made believe that he had visions of demons for which frightened people were far away from his home.
But even when the stories appear mysterious, improbable and incomprehensible, it is always possible to look for an explanation, an interpretation of the facts and stories.
These spirits that over the centuries continue to live in the same place are nothing more than the genius loci of the ancient Romans.
The genius in the archaic religion is that which protects the individual, it is a good spirit that is born with the individual and accompanies him throughout his life; then over time genius is no longer just the tutelary deity of an individual, but of a people, of a city but also of a place; it is both soul, vital principle and guardian.
The Roman people had his genius as evidenced by the gigantic statue (396 cm) of the second century AD, known as Lare Farnese, representing a young male even if in fact the genes did not have a specific sex as evidenced by the inscription on the Capitoline shield where the genius of the city of Rome is indicated as follows: enius urbis Romae sive mas sive femina (genius of the city of Rome both male and female).
Genes protected and painting them in their different guise served to recall their protection, so in Rome the genius loci was painted in the form of a snake on the walls to protect them from filth.
However, the Romans recognized genes as having a life of their own. In fact, in addition to helping man, there were geniuses who were workers and inventors such as the perfumery geniuses in which males were represented with feathered wings and females with butterfly wings; there were geniuses who minted coins or those of the grape harvest and wine and, then, there were cupids who were purely playful geniuses.
Over the centuries, the sweetheart became the "cupid" who lives at home and protected the marriage union, but over time it transformed into a playful and irreverent sprite who shared the places of life with men. His name was also forgotten and his soul seemed to double, so each man had a good protector called a guardian angel and a little devil who lived his life inside the house and sometimes came to create havoc. In Italy it was called in many ways: Baffardello, Fajetto, Mazarul, Mamucca, Mazzamorello and others.
In the Rome of the Popes, Mazzamurello was a little dwarf dressed as a cleric, with silver buckles on his shoes and with a red "skullcap" on his head; but the appearances he could take were different, sometimes he looked like a snake, sometimes like an old man with a wig but sometimes he presented himself with a look that revealed his positive side, like a handsome elegant young man with a hat. These sprites still live in the old houses in the alleys of Rome and if you happen to meet the handsome young man if you can take his hat off, he is willing to fill the lucky man with gifts in order to get it back. But the Mazzamurello of the Trastevere alley seems to have a real passion for beautiful and modest girls and when he meets them he protects and sends them many mysterious gifts.