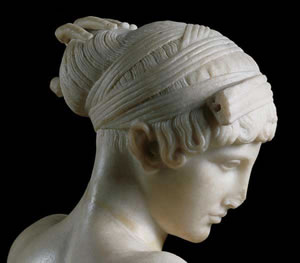 In 1874 during the works for the construction of sewers in New Esquilino district discovered a buried compartment in the perimeter of the Villa Palombara garden which in turn was where in the I century A.D. Lucius Elio Lamia consul had built its beautiful Horti.
The consul Lucius Elio Lamia was a great friend of Emperor Tiberius and grateful for the favors he had enjoyed during his life, he bequeathed the property of its gardens to Rome; the Horti Lamiani entered so in the imperial property much that here sometimes was living Caligula who was also buried there for a short time after death.
The imperial villa was built following the proceeding of the hill with nymphs and cryptoporticos made precisely taking advantage of the variations in height that made it similar to the "abodes of the Gods" (Terence); It was also used by the emperors of the second and third centuries. who continued to build other rooms and to decorate with precious materials and works of art environments already made.
In the imperial villa they must have resided all the principles of Rome and in fact the archaeological excavations have identified seven building phases from the I cent. B.C. until the fifth century. A.D. .
During the Middle Ages the whole area was gradually abandoned because the aqueducts were not working anymore and being the area at a higher altitude was no longer supplied of water.
The buildings that were saved from the invasion of the barbarians and the armies that followed until the thirteenth century were ruined and were covered with earth layers that became the vineyards of the noble families and cardinals until Rome became the capital of Italy and it started to build the modern city.
It so happened that in December of 1874 during the works in Via Foscolo there was a land subsidence and the workers found an underground room filled with statues; was soon called Rodolfo Lanciani, responsible for the Archaeological Commission of the City of Rome who because the statues were massed together deduced that "had to be dropped for the breakup of the upstairs ceilings which was the main floor of Building and was at level of the ancient land".
Today, this explanation seems simplistic and dismissive; the treasures found were statues, bas-reliefs and inscriptions of both Roman and Greek art but also their heterogeneity suggests rather that were pooled and placed in the underground room to protect them. Among experts, there are those who think that these masterpieces were placed in underground room by Maxentius who wanted to rebuild the villa and so wanted to protect them from accidental damage during construction.
These jobs would not have ever made because Maxentius was defeated and died in Ponte Milvio, and so you forgot about the treasures hidden in the basement. Yet another explanation, perhaps more plausible is the custom that had taken the people of Rome to hide in underground rooms, or even burying, works of art and precious objects when the city was going to be invaded and pillaged; other treasures hidden in this way have been found well protected from their hiding - as the bronze statue of the Boxer at rest and silverware of the famous Treasury dell'Esquilino- probably because those who hid them died and could no longer return to unearth them ...