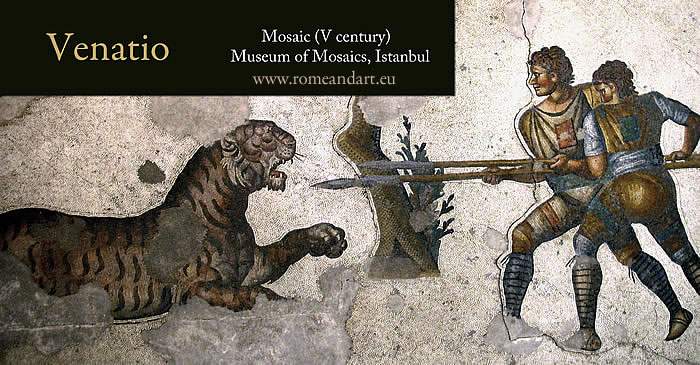 When the Colosseum was inaugurated in A.D. 80, the emperor Titus celebrating 100 days of games that the historian Dio Cassius called really great because the marvel was not only the many gladiator fights, but the great representations of naval battles and hunts:

There was a battle between cranes, and even four elephants: wild animals and not were killed until the number of nine thousand. ... .. Titus suddenly filled that theater with water, and brought in horses and bulls and other animals who were trained to stay in the liquid element as well as on earth.

To give this kind of shows it was necessary that near the Amphitheater there were spaces and facilities where men and animals could be trained and you could build sets for the games. Titus didn't have time to realize these works and then it was the successor Domitian who built all the gyms for the gladiators and the menageries for the beasts near the Colosseum; these buildings were known as Ludus Matutinus.
The term ludus is used in Latin to indicate the game, the show, but also the school, therefore the gym, or the training place. The construction and maintenance of the Ludus were the prerogative of wealthy individuals; they were famous the schools of Praeneste, Pompeii, Capua, which had been founded by Aurelius Scaurus in the III century B.C. and whose "excellence" was also used in training the legions. In Rome the first ludus was built in the first century. B.C. near the PompeiusTheater. With the Empire the Ludus became property of the princeps because he was who offered the games to the people and the great amphitheater was owned by the state.
Domitian built four gladiatorial ludi all near the Amphitheater of Rome: Ludus Magnus, Ludus Gallicus, Ludus Dacicus, Ludus Matutinus; they were all gyms intended for gladiators but the training they were subjected to was differentiated by the type of combat they were supposed to perform.
These fights took place throughout the day and those that took place in the morning were called Ludus Matutinus and were the games in which the gladiators fought against the beasts.
The gymnasium where the Venatores were trained (term which means hunters), as the gladiators who fought against the beasts were called, were on the heights of the Celium hill facing the Colosseum; Domitian to build them had used part of the area occupied by the Claudianum, the great sacred complex that Agrippina had erected to celebrate the Divus Claudius and was largely destroyed in the fire of 64 AD. The dimensions of this building were much smaller than those of the Ludus Magnus, in fact much of the space had to be used for the cages where the animals were kept until they were brought into the arena and used in the Venationes.
Over the centuries it was lost the memory of the exact site where the Ludus Matutinus were found, even though there were many literary testimonies, from Ovid to Seneca, which mentioned a ludus bestiarius on the slopes of the Celium. At the beginning of the twentieth century, Rodolfo Lanciani studying Forma Urbis, hypothesized that the Ludus Matutinus was located between the Claudianum and the Vicus Caput Africae. In 1938 during an excavation campaign on Celioum, they were found remains of parallel foundations of elliptical shape of an cavea and a sewage plant with brick with stamps of Flavia age that confirmed the hypothesis of Lanciani.
According to some historians, the name of Ludus Matutinus could derive from its ancient topographical position; according to this hypothesis, the Venatores gym took the name of Ludus Matutinus because one of the vicus that bordered the building was the Vicus Statae Matris whose name came from an altar dedicated to Matris, goddess who was the wife of Vulcan in the archaic myth. In fact the Latin word that indicates the morning is "mane, manis" and has a different root than matut-, while the ancient Matris Matuta whose altar was near the ludus is also the Goddess of the Morning, so the most suitable to protect what happens in that part of the day.
The Ludus was also said of the "bestiari" just because here were training camp of men and beasts that would then face in the venationes. These "hunts" attracted spectators for the presence of wild or unknown animals, captured in Africa or other parts of the empire, and taken to Rome to be exhibited in the amphitheater.
These were clashes between men and animals or between animals and other animals, which wanted to reproduce, even with the help of rich sets of fake trees, rocks, hills and streams, the atmosphere of the great hunts in the natural environment; one could see bullfighting, that is, clashes between men and bulls, and single exotic animals such as panthers, rhinos and even dromedaries. In the Roman arena, however, there were mainly lions and tigers, bears, wild boars, dogs and other non-aggressive animals such as antelopes, ostriches, giraffes, even elephants and hippopotamuses. More the animal was rare and exotic, greater was the curiosity and the public satisfaction ...