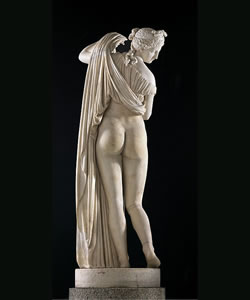 The figure of Lucretia and the values of chastity that she represents by raising her to the Olympus of the mythical figures of Rome have triggered the irreverence of Latin writers and poets since the times of the late republic.
Starting from the end of the first century. B.C. chastity took on different meanings; the Romans were no longer just warriors and their women no longer spun wool but bought precious silks from the east and adorned themselves with gold jewelry and precious stones.
The elegiac poetry changed the face of chastity, attributing to women new powers of seduction which when used up to the ultimate consequences unleashed the wit of satire; the path of chastity proceeds from Virgil to Ovid, Catullus, Martial and Petronius, passing from myth to grotesque over the course of a century.
But what did chastity consist of in Roman culture?
In maintaining a respectful behavior according to what at the time of Augustus would have been called mos maiorum for which the chastity of Lucretia is substantiated in her innocence and modesty. But Augustus's attempt to re-propose the ethical values that had made Rome great did not succeed in turning back the love and sexual behavior of the Roman aristocracy.
Pudency is a virtue that the Romans venerated as a goddess, a cult for which they built temples, also distinguishing between a Pudicitia Patritia with the temple located in the Forus Boarius and a Pudicitia Plebeia with the temple on the Quirinal hill.
The Romans distinguished between shame and pudency, which referred the first to the soul and the second to the body, so that in ancient times every young woman had to bring as a dowry to the new husband pudicitiam, et pudorem, et sedatum cupidinem (Plautus, Amphitryon Act II), where the continence of matrons is their ability to control sexual desire. But the great riches arrived in Rome, luxury and comforts had by now changed the customs of the Roman matrons and Juvenal in the sixth satire does not fail to point out that "modesty lived on earth only in the time of Saturn."
The contact with oriental civilizations contributed so much to change customs, because the behavioral rules of relations between men and women responded to different ethical principles in those countries, so much so that Martial in a epigram (II 104), reproaching his woman for not playing "... love with gestures, with fingers and not even with words ", he reminds her that even women whose chastity was known such as Cornelia, Julia, Portia and even Juno did it with their men:

If you're like being always so serious,
my dear, go ahead Lucretia, but by day,
by nigth at least, I bag you, I want you
to turn into Laide
and you discovered rice in yourself, the gestures
and charm of an attractive courtesan .
But the absurdity of the supposed chastity of matrons becomes the maximum expression of satire in the widow's fable of Phaedrus, later taken up by Petronius Arbiter in the Satyricon.
Story of the Matrona of Ephesus tells the case of Matrona quaedam in Ephesi tam notae erat pudicitiae who, maddened by the pain of her husband's death, get locked up in the tomb with a handmaid to let herself die of hunger crying and watching over her husband ...