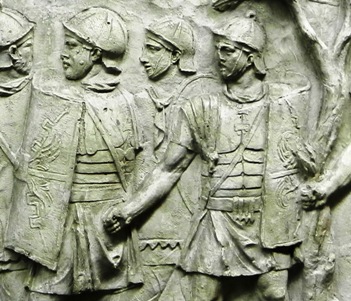 During the battles the Greeks already used body protections but for the Romans, a warrior people, they were an indispensable tool in the military campaigns that led them to become the greatest war power of all time.
The best known armours are those represented in the statues of the emperors, consuls and high officers which were parade protections but very different from those used in battle, fundamental above all for the legionaries and which were used by them since the times of the Republic. What their characteristics were can be easily deduced from the many representations in statues and bas-reliefs and also in the descriptions left by ancient historians, in addition to the discoveries that take place in various sites in the territories that were of the Roman Empire.
These armours were called lorica from the term lorum which means "of leather" because the first were made of strips of woven leather; these were protections that were developed in the battlefields by the legionaries to defend themselves from arrows and not designed for defense in hand-to-hand combat.
The lorica was improved over time by the legionaries mainly to protect themselves from arrows, that had evolved and could pierce the leather, so leather loricas were prepared but reinforced with metal or horn scales. From the VIII century. B.C. to the Vcentury. A.D. the Roman armies used some types of loricas that had functional differentiations for the use of miles in battle. The known types of lorica are called: muscolata, hamata.
The oldest protection is the lorica musculata, adopted since the 5th - 4th century BC that replaced the metal plates to protect the soldiers chest of Servius Tullius army . This army fought in the manner of the Greek hoplites with a phalanx deployment and the protections had only the nobles who wore over a white edged tunic, this one consisted of a rigid anatomical armor or a robust leather structure that ended with fraying at the height of the pelvis.
The protection was completed by the greaves, a circular shield and a high bronze Corinthian helmet surmounted by a crest of horsehair; these helmets will become an iconographic element of many representations of exaltation of the courage and military valor of the leaders of Rome.
A testimony of the soldiers' habit of making protections by themselves is found in the De Bello Civile by Julius Caesar who noted that in the clashes in Dalmatia against the legions of Pompey in which many expert archers militated, the problem of defending oneself from arrows arose:
…Therefore almost all of our soldiers had made for themselves long robes with padding, with mattresses, with leather, or whatever covers to protect themselves from those blows.
The need to have another layer of protection led over time to profound transformations of the lorica. After the lorica masculata, that presented the drawback of excessive rigidity, the lorica hamata was adopted, a protection formed by a variable number from 10,000 to 30,000 intertwined rings, whose name derives from the hami, or rings. According to Varro, the Romans copied this type of armor from Gauls; it was long up to mid-thigh and allowed considerable freedom of movement despite the weight that could reach 20 kilos. A lighter model was used for centuries by the cavalry, this one also had a protective cap for the head. The problem with this armor was in its penetrability by arrows.
Caesar's legionaries were predominantly equipped with this type of armor when colliding with Pompey's soldiers they measured on their skin the new arrows that archers trained in the East had learned to make from Parthian archers. It is no coincidence that the battle of Carre is believed to have been won not only by the Parthian tactics but above all by their bows and arrows which, according to what Plutarch and Dio Cassius recount, managed to penetrate shields and armor. After this episode, the pteryges appeared under the lorica, that is the felt quilt that can be seen fringed out under the tunic, whose thickness was the real protection from arrows ...