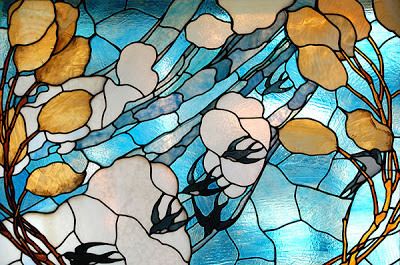 When the Art Nouveau arrived in Italy the new style that expressed was called Liberty and the world it represented was the beauty in its most fantastic shapes, a vision in which dominated the revised forms of nature as to be called even Floral Style. The new trend mainly influenced the architecture and not only in his definition of space as in the decorative elements, so that wherever in search of continuity between inside and outside was imposed a profound reinterpretation of the glazing.
In Ancient Rome from the first century A.D. and up to the VI century. the art of glass making had reached levels of extreme refinement; in the fourth century it had spread a glassmaking technique called the diatreto glass, or a glass worked slotted where starting from a blown pot very thick and removing unnecessary parts you created a grid attached to the walls, that become thin, which formed the drawing as in the Vase of Lycurgus.
But the decline of Rome also meant the decline of the arts and crafts and whether for architecture, painting and sculpture there was the Roman renaissance thanks to the popes, to the minor arts as that of glass it was necessary wait.
In the Rome of the late nineteenth century did not exist glass art, the few workshops produced everyday objects such as glasses, bottles and fojette, typical containers half-liter of wine of the Roman trattorias that the Danish painter Marstrand portrayed along with the lovely ordinary roman woman in "Osteria Romana" framework (1847).
It was after Rome became the capital of Italy which had almost a city awakening, now inhabited by a rich bourgeois clientele and stimulated by currents of thought that favored new forms of expression and in particular the Art Nouveau architecture than in Rome was called Liberty.
In Rome worked a craftsman who revolutionized the art of stained glass, was named Caesar Picchiarini but his friends and then by everyone called him Mastro Picchio and he had his own workshop at the Piazza of Crows Well at Ripa . Mastro Picchio was born in Rome in 1871 and at 15 years old he began working in the glass factory of his father Sisto which then he would have inherited in 1899. In the early decades of the 900 revolutionized the art of stained glass, leaving the the true Liberty jewels scattered in the city and a great legacy "know how" that is still found today in the workshops of the master glassmakers of Rome.
Picchiarini brought something new and even refused the liberty mannerisms of some craftsmen and artists of which he declared in his diary "Between glass and diamonds, life notes, craft and art": "Over the years 1904-1905-1906, was raging on the Art Nouveau decoration, and here which consisted on: taken as subject an unfortunate iris, all industrial laboratories, from the ladder to the goldsmith, are believed authorized to perform the unfortunate flower in the most ridiculous stunts ".
In the workshop of Mastro Picchio they came together young architects and decorators, among them Paul Paschetto known decorator of walls, which became fascinated by the glass creations of light made done by Mastro Picchio, according to his proposed technique, the windows of the Temple Valdese in Via del Teatro Valle. Soon to the workshop of Mastro Picchio also addressed Duilio Cambellotti, Umberto Bottazzi and Vittorio Grassi ...