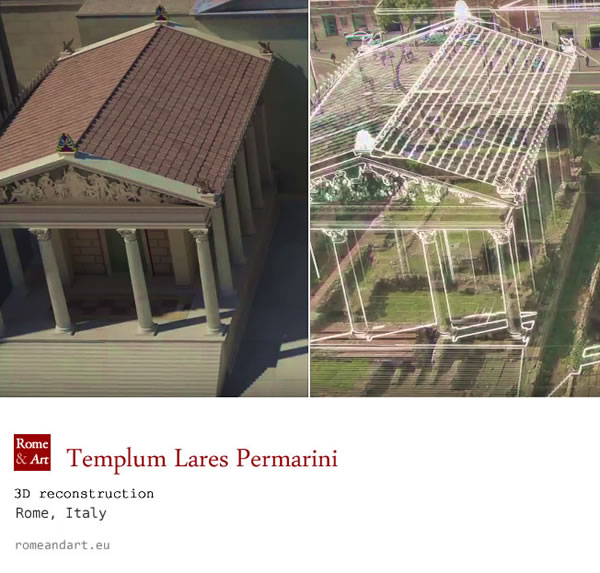 In southern Campus Martius, where greater was the influx of people for the presence of the Porticus Minucia Vetus where it was the distribution of the grain, already in the Republican era was bordered sacred area in which were built the temples for the worship of the ancestral gods.
The first two temples were built yet in the fourth and third centuries BC and it is believed to be dedicated to Juturna nymph (Temple A) and to the goddess Feronia (Temple C), fertility goddess protector of forests and crops; also the temple D was dedicated to ones gods of archaic Roman religion: the Lares Permarini protectors of navigation.
The Lares were gods who protected the people, the house and the activities. Each family had its Lares who represented the souls of the family members departed and in any domus there was a lararium where they celebrated the cult of their Lari. But there was also a public cult of the Lares, when these gods were invoked to protect the places or activities like Lares compitales that protected crossings, the Lares Praestites that protected border between the territories inhabited and wilds and Lares Permarini to which protection of ships along the shipping lanes was entrusted. The task of Lares Permarini was to protect the Roman crews when they were away from Rome and their effigies or small statues, usually earthenware, were placed on the prow of the ship in a shrine called lararium.
The cult of the Lares Permarini appears as a Roman interpretation of the cult already practiced by the Phoenicians who called them Pataicos and put their representations on the prows of ships. When at the beginning of the second century BC Rome came into contact with the Hellenic culture and civilization through the cities of Magna Graecia, Greek influence began to be apparent in Roman culture and Neptune, Castor and Pollux, Amphitrite and Tritons were considered Lares Permarini. Even Livy recalls Lari Permarini: "Suspendit Lares marinis, molles pilas, retícula, strophia"
The Lares protectors of sailors came into the pantheon of the gods of Rome with a place of cult for a vote that gave Lucius Emilius Regillus during the naval battle of 190 BC that pitted the Roman fleet to that one of Antiochus III of Syria at Mionneso Cape. He made a vow to build a temple to the Lares Permarini if they had protected and guided until victory; Lucio Emilio Regillus managed before to defeat the greatest enemy of Rome, Hannibal - that after the defeat in the Second Punic War had taken refuge with Antiochus finding in him an allied with which tried to bring the war in Italy - in the naval battle at the mouth of Eurymedon and then to destroy the entire fleet at Syrian Myonnesus Cape; so it was that the father Lepidus in 179 B.C. built the temple in the Campus Martius. About construction of the temple and its DEDICATIO also tells Livy in Book XL, which also shows the full text of the "table"(dedicatory inscription):
" ... Idem (Marcus Aemilius) dedicavit sedem Larium Permarinum in Campo. Voverat eam annis undecim ante L. Aemilius Regillus; navali proelio adversus praefecto regis Antiochi. Supra valvas templi tabula cum titulo hoc fixa est: “ Duello magno regibus dirimendo … caput subigendis patrandae pacisgna exeunti L.Aemilio M.Aemili filio auspicio, imperio, felicitate ductuque ejus inter Ephesum, Samum, Chiumque inspectante eos ipso Antiocho, exercitu omini, equitatu. Elephantisque, classi s regis Antiochi antea sea victa, fusa, contusa, fugataque est, ibique eo die naves longae cum omnibus sociis captae LXII. Ea pugna pugnata, rex Antiochus regnumque ….eius rei ergo sedem Laribus Permarinis vovit”"
"The same (Lepidus) consecrated the temple of the Gods Larii Permarini in Campus Martius which had vowed forty (?) ) years before Lucius Emilius Regillo in the naval battle against the captains of the King Antiochus: and over the door of the temple was hanged a table with this title: "in the great battle under the government, hope and happiness of Lucius Emilius, son of Marcus Emilius, including Ephesus, Samos and Chios, where in the presence of Antiochus himself, and the whole army, cavalry and elephants , the king's army was broken, hunted and destroyed; and there seventy-two (?) that day were taken length ships with all peoples; what made the battle, the king Antiochus. and his kingdom was passed and won, and for this reason Lucius Emilius vowed to build this temple to the Lares Permarini".(Tr. Jacopo Nardini)
There is no evidence of Lares Permarini before that event, why some historians believe that it is a greek cult that has been assimilated by the Roman culture; the connection would be unveiled by the same Lucius Emilius Regillus that for the same vote also made a dedication to the sanctuary of the Cabiri of Samothrace, and it is not unlikely that the famous Nike of Samothrace was just the votive offerings dedicated by Emilius Regillus to these gods. But the Romans were already devoted to the Cabiri, in fact, the Consul Marcus Claudius Marcellus after defeating Syracuse had dedicated a part of their spoils to the sanctuary of Samothrace ...