The Knights Templar in Rome 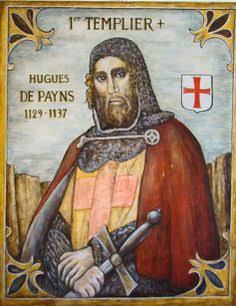 At the beginning of the 12th century Rome was a small city with 20,000 inhabitants where the Pope lived "perched" in the Palaces of the Lateran; Hugues de Payns presented himself here to ask Honorius II for the approval of the new order rule which had been written by Bernard of Clairvaux. Hugues de Payns was accompanied by Godefroy de Saint Omer, both had been among the knights of the First Crusade, the one wanted by Urban II and who had conquered the Holy City and founded the Kingdom of Jerusalem. Since then pilgrims flocked from all over Europe to places of faith but the journey was long and they had to cross difficult lands for the climate and for the populations, hostile to the Christians, who lived there.
The knights who remained to defend the Sepulcher of Christ began to give their protection to those who wanted to go on a pilgrimage to Jerusalem and so, in 1128 Hugues de Payns thought he could transform the group of knights who had gathered around him, even over 1112, into a religious order that had among its duties to defend the pilgrims who made trips to the Holy Land: the order of the Temple.
Pope Honorius II admitted the proposal of the new order and, on January 22, 1120, the Council of Nabilus deliberated the birth of the order of Poor Knights of Christ and of the Temple of Solomon. When the King of Jerusalem Baudouin granted them the use of a wing of the monastery of Our Lady of Sion as their order seat, adjacent to the Temple of Jerusalem, their name was turned into Knights Templar.
In Rome the link between the Popes and the Templars was very close, so much so that there were two Templar knights alongside the Popes for their protection. It is no coincidence that in the fresco known as the Dream of Innocent III in which the central character of the story is Saint Francis, represented as a column of the Church, the two knights who sleep on the ground next to the pope's bed are a Hospitaller and a Templar.
Compared to the other orders that made the vows of obedience, poverty and chastity, the Templar pronounced another vow, "stay in arms": they were warrior monks.
Their rule was hard and fast and the 72 articles placed prohibitions on behavior - you could not touch women (not even your mother), you could not go hunting, you could not entertain in any game, .. - and dictated the rhythms of everyday life - in the winter the alarm clock was at 4 in the morning, in the summer at 2 in the morning to pray, they went to sleep "in arms" to always be ready for battle - including how to dress and wear hair that must always be short or shaved.
They were warrior monks and when Bernard de Clairvaux found himself having to justify the use of weapons and the murder found support for St. Augustine's thesis of the "just war", they killed to defend the Holy Sepulcher and those who went to pray ; theirs was only "malicide", they destroyed the evil that opposed the peaceful profession of faith. Their seal represented a horse ridden by two riders to symbolize both the initial poverty of the order, so the riders went in two on a horse, and the universal dualism and their ideal of peaceful coexistence in the Holy Land of Christian culture and the Islamic one.
The great power of the Templars began when, with the bull "Omne datum optimum" of 1139, Pope Innocent II granted total independence to the Order, including exemption from the payment of taxes and gabelles; they were not subject to any power and had to account for their avtivities to the Pope only.
In the two centuries that followed the order, now become an organism free from any interference, while maintaining faith in its mission, it also became a financial power because in addition to the donations and bequests it received, many nobles and kings who went to defend the Holy Land they entrusted the collection and management of the tributes in their possessions and the Priors of the Order were able to make good use of the resources both by lending sums of money to those who requested them and by purchasing properties. From this activity it took shape the famous treasure of the Templars, to which the sovereigns of the Europe countries began to look and when, after the fall of Jerusalem and its kingdom and the last defense at the Acre fortress, all the Knights Templar were killed and the Order left the Holy Land forever, they began to build the most infamous accusations against the knights for taking possession of that treasure.
The knights, returned defeated by the Holy Land, could only devote themselves to the "affairs" of their order but, for their power and their independence, they were feared by the kings and also the Pope began to consider them a danger for the Christian Church. To resolve the problem a Council was called, the fifteenth which was held in Vienne near Lyon in 1311-1312; the council had three objectives, to decide the fate of the Order of the temple, to reform the church and finally to call for a new crusade ...