Temple of Jupiter Stator in Palatio 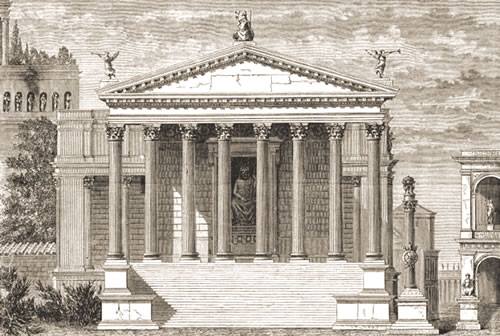 The legend tells that the temple was built by Romulus near the Porta Mugonia, at the point where he vowed honoring Jupiter with an aedes if he had "stopped" the retreat of the Romans who were retreating inside the walls pressed by the Sabines:

According to the legend, Jupiter placed himself firmly in front of the enemy outside the door Mugonia, this infused new courage to people of Romulus who validly withstood the enemies and managed to repulse the attack and then continue the battle that, according to legend, was then interrupted by Ersilia and other sabine women now wives of the Romans.
To comply with the vow he had made Romulus built a fanum outside the walls of his Roma, had to be consecrated area with an altar and an archaic votive well; Atilius Regulus will then build a temple in 294 BC when at the Battle of Lucera, during the third Samnite war, he invoked the intervention of Jupiter Stator to stop their soldiers frightened by the enemy, they had begun to escape from the battlefield and so he voted for the construction of the temple in the place of the altar Romulus.
The rebuilding of the Temple by Atilius Regulus was very important because of Romulus fanum was transformed into a beautiful and broad aedes which stood on the same site and had to be really great because in 207 BC met there ter novanae virgines to sing a poem composed by Livius Andronicus not only, but Cicero did convene the Senate there to denounce the conspiracy of Catiline.
According to Plutarch, Cicero called the meeting of the Senate in the Temple of Jupiter Stator, which therefore was able to contain as many as 300 people and delivered you the first Catilinaria whose famous incipit is:

Quo usque tandem abutere, Catilina, patientia nostra?
As long as you mean to abuse, or Catiline, our patience?

And that ended with a prayer to Jupiter Stator so that help the citizens of Rome to stop him.
Another famous event which took place in the temple was the auction for the sale of confiscated property to Pompey after his death; at auction no one dared to bid, only Mark Anthony made its and acquired ownership of all the houses and goods of Pompey. Some historians have suggested that behind the offer there was actually Julius Caesar, a possibility which seems to be confirmed by the fact that Mark Anthony never went to live in any of the homes of Pompey, then with Octavian passed in imperial state property.
The Temple was in Summa Via Sacra, and, as Pliny (Naturalis Historia) tells citing Annius Fetiale, just in front of the temple stood the domus Tarquinii in which porch was a statue of Clelia, one of the Roman heroines, at horseback.
The temple, given its position, was badly damaged by fire in 64 d.C .; from what emerged in the excavations conducted in the nineteenth century already and the more recent ones, it seems to have been rebuilt on the same site, fact that leads its displacement at Velia on the other side of the Via Sacra, to another cause; and it was the Temple constructed on the Velia that to be reported in Regionari Catalogs. Rebuilt on the opposite side of the Via Sacra, of the new temple will have no precise guidelines to locate him, but for some time now has been reconsidered the identification of the circular temple known as "Mausoleum of the deified Romulus" or a wing of the Temple of Peace that Maxentius did readjust as aedes for her son who died adolescent and consecrated Divus; according to some researchers after the fall of Maxentius was defeated by Constantine, the temple would be re-dedicated to Jupiter Stator restoring the cult that had been forgotten in the previous century ...