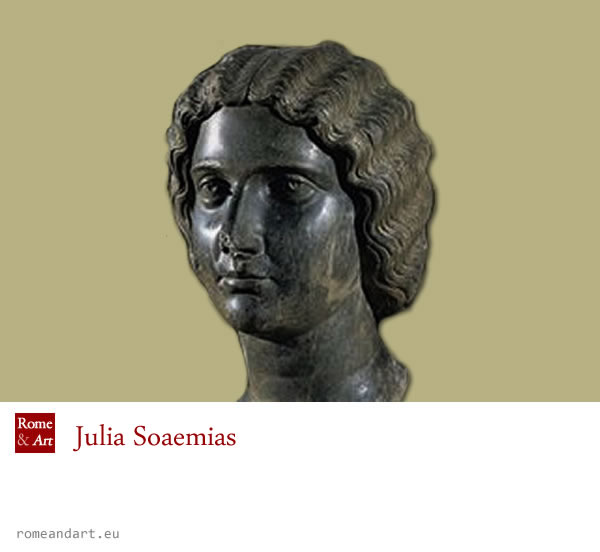 Julia Soemia Bassiana was in fact empress as regent for the young Elagabalus whom she joined in the short years of reign and whose death she shared. Her name is linked to the Severi dynasty to which it belonged because she was the niece of Julia Domna, wife of Septimius Severus and both were Syrian women having been born in Emesa from the rich and powerful family that descended from Gaius Julius Bassianus or Bassus, priest-king of Armenia and clientes of Rome; she her full name was Julia Soaemias Bassiana and she was born in 180 AD.
When Septimius Severus was acclaimed emperor and arrived in Rome, he called Julia Soaemias to him as well as all family of his wife and many other Syrian nobles. However, a few years passed before Settimius gave her in wife to Sextus Varius Marcellus who belonged to a family of knights but who had important positions under Settimius Severus until becoming prefect of the city under Caracalla who, then to remove from Rome some relatives he considered uncomfortable, sent him to Numidia as governor and where he died in 215 AD; Caracalla did not send his aunt back to Rome, whom he sent back to Emesa with his son Sextus Varius Avitus Bassianus.
Military and political career of Julia Soemia's husband is well documented by the epigraph of his tomb found at the end of the eighteenth century in Velletri, and now preserved in the Pio-Clementino Museum, which shows how he was linked to the imperial family.

Some historians report that Elagabalus was his second son with no other indications of the first son, of which no epigraphic evidence has been found yet .
During the years in which she lived in Rome, Julia Soemias had a reputation for a certain facility in adulterous relationships; many rumors of her circulated about her relations with her cousin Caracalla, but also with Geta and with her brother-in-law Gessio Marciano, husband of her sister Julia Mamea. The story that his mother would then use years later to convince the legions to support her son's claim to succession, was based on these rumors: Elagabalus' natural father would have been Caracalla and therefore the boy was the legitimate heir of Empire.
The historian Aelius Lampridius tells us that Julia Soaemias lived at court meretricio more (like a courtesan) practicing omnia turpia, so that the child she had was considered vulgo conceptus (conceived by the people) because it was not possible to specify the father. The historian adds, certainly with his own free interpretation, that his schoolmates called him Variovaria because it was not possible to know from which seed he was conceived. On other hand, the relationship that Julia Soemias had with Gannys, tutor of her son Avitus Bassianus, who had been appointed priest of Sun God at age of seven year, was known and confirmed. Figure of Gannys was decisive for the success of the strategy that Julia Soemias and her mother Julia Maesia put in place to be able to make the teenaged son of Julia Soemias become emperor.
Gannys was an erudite man and an excellent orator, in fact it was he who spoke to legionaries and convinced them to support his lover's son and, to those who did not abandon Macrinus convinced by words, he himself provided to distribute money, the same ones that came from Julia Domna's treasure and that her sister had brought with her to Emesa. But Julia Soemia's lover, out of love and power, also proved to be a good military leader and managed to defeat the troops who had remained loyal to Macrinus. Elagabalus was able to enter Antioch and proclaim himself emperor, but the boy did not have the real perception of the world convinced that he was the son of the Sun God. He did not hesitate to repress the revolts in blood and whoever tried to reason with him could not escape his fury; Elagabalus also killed Gannys guilty of too mild advice ...