Invitation for lunch by Cardinal Aldobrandini 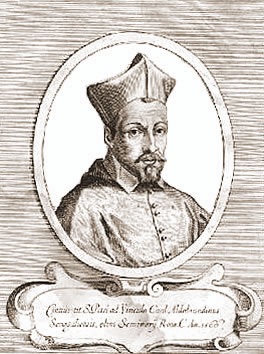 The pontificate of Clement VIII, formerly Hippolytus Aldobrandini, was under the sign of the greatness and munificence of the Papacy and nepotism, in fact he appointed two nephews Pietro Aldobrandini and Cinzio Passeri Aldobrandini cardinals.
Cinzio, son of a sister of Hippolytus Aldobrandini who died young, was adopted by his uncle and after graduating in Padua, he became his secretary since he was papal legate; when Hippolytus became Pope Clement VIII, his nephew was appointed referendary and secretary of state, he was 37 years old; he became a cardinal the following year (1593). In the chronicles of the time we read that The Cardinal of St. George, Cinzio Passeri Aldobrandini, son of Isabella sister of the Pope, was the most pompous and munificent of the cardinals of his time. He wanted the ceremonial of court life to be made mandatory; the ceremonial was respected at least until the great changes of the French Revolution which forced the Pope's court, the Cardinals and the Curia to renounce unnecessary, stupid and irrational modalities in the acts of daily life and in interpersonal relationships.
The papal court in the sixteenth century was experiencing one of the moments of maximum splendor and nepotism was a practice to which no pope seemed to be able escaping; The papal court in the sixteenth century was experiencing one of the moments of its greatest splendor and nepotism was a practice that no pontiff seemed capable of escaping; but if the Pope had limitations in his behavior for his mission as Vicar of Christ, it was not the same for Cardinal Nepote, in whose hands the management of temporal affairs remained.
Cardinal Cinzio was considered one of the most enlightened exponents of the Papal Curia even though it was he who formalized the ceremonial that his court was to follow and which became an example for all the cardinals for two centuries at least. He was a patron for many artists, men of letters and men of culture who loved to receive and host in his Villa in Frascati; it is said that his table was always set for at least six people and his munificence was clearly visible on his table always surmounted by triumphs of rare fruit and flowers.
Among the artists who were very often guests at his table were Giovanni Battista Raimondo, from Cremona, and Torquato Tasso, the author of the epic poem Jerusalem Delivered who was protected in a particular way by the Cardinal.
In the chronicles of the time, it is reported the ceremonial that was followed when Cardinal Cinzio and his guests were seated at the table; the cardinal at the table had to be served by as many as three valets: the cupbearer, the lad and the carver who after helping the cardinal washing his hands and sit up, put him "a bib as is used with children"; the same assistance was offered to all the diners by an incredible number of valets and gentlemen, these had the faculty to keep their heads covered, while the valets could put on their hats only when they were not waiting for the guests.
The cardinal's court was made up of an incredible number of people who attended the banquet without patecipating: the butler, the house master, the chamber master, the secretaries, the auditors, the senior horseman, the waiters of honor with sword and cloak.
The housemaster had to stand behind the Cardinal to see that everything was going well, the chaplain had to bless the table before lunch and then give thanks to God at the end, finally there was the henchman who had the task of reading a book spiritual content but he stopped reading when the Cardinal asked to drink wine, that was the signal that you could start talking amiably and spiritual book was put aside ...