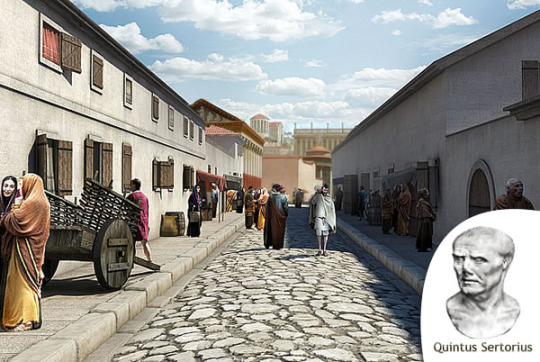 The insulae were the collective dwellings of ancient Rome and could be identified with the name of their owners, as well as for the Insula Volusiana which took its name from da Lucius Volusius Saurninus; the insula had been built in the Forum Boarium and had one of the sides on one of the vicus where the triumphal processions passed.
In the year 1819 an inscription was found inserted as an ornament in the plaster of "an ancient private house, ... , six palms under the road, near the church of Sant’Eligio de Ferrari "in which an Insula Sertoriana was indicated: the inscription was an act of succession. The place where it was found allows you to identify the Sertorian Insula as it is located along the branch that descended from the vicus Jugarius towards the Forum Boarium, in that road which today is called via S. Giovanni Decollato.
The epigraph provides many other information on the insula such as the name of the owner and how this insula was composed:
CIL 6.29791

The insula was called Sertoriana because it was built by Sertorius, a faithful follower of Gaius Marius and it was probably he who obtained the area under concession, because it should be remembered that the soil near the spaces used for public activities remained the property of the state domain. Almost certainly it was a small insula and in fact in the donation act mentioning six rooms, or apartments, which could be connected to the ten tabernae below.
What could have been the year in which Auria Cyriacetis came into possession of paternal goods could be established by trying to identify who this woman was; it certainly belonged to a wealthy family where women had the opportunity to manage their wealth. A brief mention of a "Cyriacetis foemina" is made by Platina who, prefect of the Vatican Library at the time of Sixtus IV, had access to writings that were in the Vatican Archive in order to write his book about the life of the popes.
From documents it seems that the "Cyriacetis foemina" was a wealthy patrician who, widowed after eleven years of marriage, had converted to Christianity and used her belongings to support Christian church.
In her house on the Caelian, during the persecutions of Decius, the Christians met to celebrate the "mysteries"; the domus Cyriaci was located on the top of the hill and here the wealthy converted patrician hosted the deacon Lawrence who healed her from a headache.
In the 4th century A.D. the domus became titulus Cyriaci and later, since the Greek name Cyriaca in Latin becomes Dominica, some scholars put forward the hypothesis that the church of Santa Maria in Domnica was built on the area where the domus of Cyriaca stood. However even if the exact identification remains uncertain, the house was certainly located on the top of the Celio hill.
For his support for Christians and his faith Auria Cyriacetis or Ciriaca, suffered persecutions at the time of Valerian and Decius and died after suffering martyrdom; her body was buried in the praedia on Via Tiburtina where she had built a catacomb for Christian adepts and where the deacon Lawrence was already buried.
Above the catacombs of CYriaca, also known as Catacombs of Saint Lawrence, it will rise the Basilica of Saint Lawrence and on the ground of Ciriaca, Campus Veranus, it will be built the cemetery that over the centuries will become the cemetery of all citizens of Rome.
After the death of Cyriaca, hers properties were acquired in the imperial state and among them also the Insula Sertoriana that perhaps at the beginning of the fourth century. A.D. it still had to be inhabited and probably was until Alaric's invasion of Rome in 410.