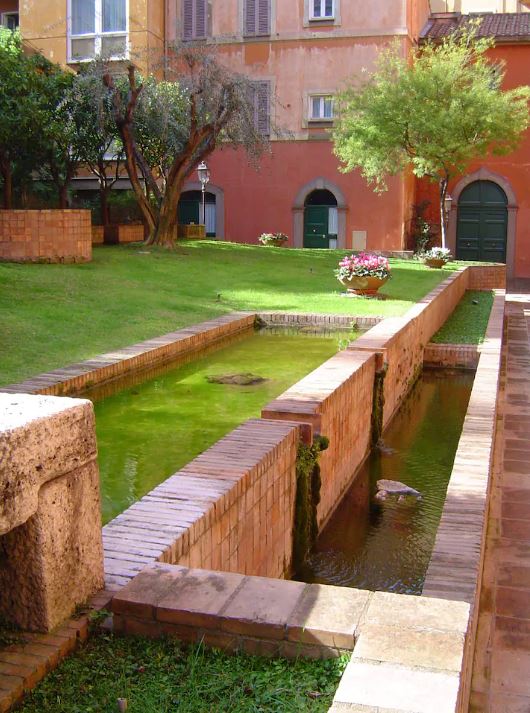 In the III century B.C. Rome with 187,000 inhabitants was already the most populated city in the ancient world and would have remained so until 455 AD when it was sacked by the Vandals; at the time of Augustus the inhabitants were one million and reached the maximum expansion during the dynasty of the Antonines in the second century A.D.
The areas of Rome occupied by the domus and insulae increased, which, after the reclamation of the Campus Martius by Agrippa, were built in the Regio VII according to an urbanistic scheme that privileged the regularity of the roads that is found, in part, also in the so-called Rome Sistine.
During the renovation of some houses in "via in Arcione" one of the largest urban complexes of Ancient Rome was found; are three buildings and two paved streets that run underneath the Trevi district between Via del Corso and the Trevi Fountain. These buildings were in the territory of the Regio VII via Lata, one of the fourteen regions in which Augustus divided Rome, which extended between the Via Flaminia (in the Middle Ages and the Renaissance called Via Lata) to the south-west and the slopes of the Quirinale and Pincio to north-east and was the only one where the roads had the route perpendicular to Via Flaminia.
The remains of the two streets and Roman buildings, refer to a clear image of the type of dwellings of the Regio VII in the period from the 2nd to the 4th century AD; unfortunately it is not possible to visit the site as it is located at a depth of about 8 meters in the area of private houses. However in the block between "via in Arcione" and "Via dei Maroniti" a garden opens up on the inside that is a superstructure of the area and a garage from that it is possible to see some parts of the archaeological area that measures about 1,600 square meters.
At the exact point where the remains of the buildings were found opens up the aquifer of the Sallustian Water that still flows today and whose level is contained by means of pumps.
The aquifer comes from a spring that already in ancient times gushed from the slopes of the Quirinale and along the declivity (current Via del Lavatore) descended into Campus Martis forming the Palus Caprae which was drained by Agrippa to build his thermal baths.
In 1902, during the construction of the Umberto Tunnel, the remains of a Roman domus were found and from the inscription of a fistula (hydraulic connection) in the lead pipes it was possible to attribute it to Fulvius Plautianus, prefect of the Praetorium in 197 AD and father-in-law of Caracalla.
This was the area formerly called Campus Agrippae, there were mainly insulae built along paths (vici) oriented on the axis of the Via Lata that crossed at right angles, therefore perhaps one of the few areas where there was an urban plan similar to those of the cities built by the Romans in the provinces.
In the excavation work, three buildings were identified divided by two streets that run parallel to Via Lata (today Via del Corso); the first building (A) has a series of tabernae overlooking the very wide street, m. 8.20, and it had a porticus that probably overlooked another road that is beyond the excavated area. The two buildings were certainly in communication because in the back wall there is a buffered doorway and in the second taberna there is a wall that supported the staircase that was to lead to the upper floors.
From the constructive characteristics, archaeologists have attributed the construction to the third century AD. with changes also in later times, in fact on the same road, in front of the entrance of the third taberna there is a cubic structure of 2 meters on each side built with pieces of bricks (spolio materials), it is a well of the high medieval built to draw water from the underlying aquifer. In the fifth century, both the road and the buildings had already been largely buried due to the frequent flooding of the Tiber that, as the water receded, left debris and mud with a consequent increase in the level of trampling. On the other side of this great road there is a large basin made up of 4 travertine slabs, it was the public fountain where the inhabitants of the insulae went to get water; the basin is leaning against the wall of building B which is perhaps the most mysterious, as regards its use, of the three buildings identified. It is a single rectangular room wedged between the two roads whose construction characteristics indicate its construction around the third century. A.D. ...