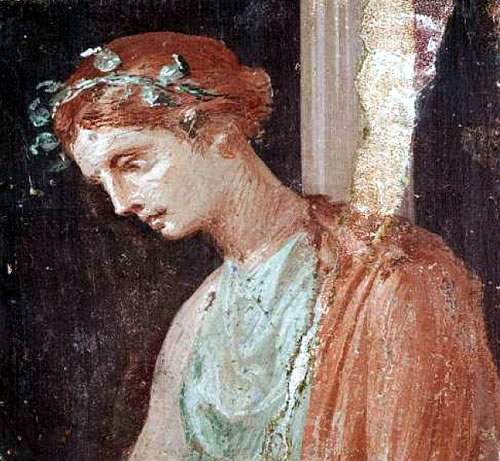 To the Roman woman was not recognized rights. Since the emblematic episode of the "Rape of the Sabines" had to submit to the protection of a man, first the father and then, when married the husband; the only ones to whom it was recognized, in a law of the XII Tables, a certain independence were the Vestal Virgins:

Feminas, etsi perfectae aetatis sint, in tutela esse, exceptis virginibus Vestalibus
The females, although of adult age, must be under protection, except the Vestal virgins.

The women, whether they were prostitutes or matrons, could not decide for themselves, their possessions, their children and the reasons given were the ignorantia iuris (ignorance of the law), imbecillitas mentis (natural inferiority), infirmitas sexus ( sexual weakness), levitatem animi (lightness of spirit); so it was quite impossible for a woman could take the word in public to defend herself or someone else, yet there were exceptions.
Among these exceptional cases was Hortensia who pleaded in 42 BC the reasons of Roman women against a tax deemed to be exorbitant and his oration is considered extraordinary not only for the exceptional nature of the event but also for the arguments that Hortensia used.
Hortensia was the daughter of Quintus Hortensius Ortal, a famous lawyer and rival of Cicero who had reached the highest positions, becoming consul in 69 BC and had allowed her daughter to have a higher education, the one the Romans reserved only for male children. The women of the Roman aristocracy were aware of hers competence of the law and hers oratory capacities that when they felt unjustly penalized by a decision of the triumvirs Ottavian-Antonius-Lepidus, which imposed a strong taxation on the matrons, asked her to be the spokeswoman of their dissent.
To the reasons that had led the triumvirates to decree the new tax that should not only generate revenue for the treasury but also, as a return to the mos maiorum, put a stop to the luxury that the matrons feared with jewels and refined clothes, Hortensia contrasted what the Roman women had given in the course of the Rome history and she not only extolled their behavior but remarked on it with a recrimination on the luxury of which also the men were showing off. Hortensia proved to be an able speaker because she knew how to use the arguments of Roman law: according to this, in fact, women were denied access to power and in the magistrature and so, Hortensia argued that if women were excluded from power, at the same time so they should not be asked to pay fees for their exercise.
Hortensia succeeded in winning in part the cause so much that only 400 matrons of the initial 1400 ones were taxed, but the fact was surprising for the Roman society: a woman who could be recognized the reasons of other women before a male court. The extraordinary was such that the historian Valerius Maximus (Facta et dicta memorabilia, 8, 3, 1) came to give an interpretation of the incident which disturbed the spirit of Hortensia's father, whose daughter's voice would have been only an instrument.
But Hortensia had an illustrious precedent in Manilia, whose history is given in the Attic Nights by Aulus Gellius. She in the secund century BC was brought at the courthouse by aedile curule Hostilius Mancinus who accused her of hurting him with stones.
Manilia was a prostitute and appeared before the judges without a lawyer and would to defend on her own. The woman spoke in front of the Court and was able to show that Hostilius Mancinus had shown up at his house at night knocking insistently on the door and since she did not open, the magistrate tried to knock down the door; for this reason Manilia from the window had thrown a stone that hit him in the head. The court recognized the woman's reasons rejecting any accusation.
After Manilia in the first century B.C. Was Maesia of Sentino wich in court defended herself alone. The process of which she was the protagonist is told by Valerius Maximuswho justifies the decision to defend herself on her own with the unavailability of every male lawyer to defend her. Valerius Massimo does not clarify which was the crimen she was accused of but it had to be very serious if she was judged by a court presided by a praetor and, furthermore, didn't found anyone who wanted to defend her.
The story of Mesia is different from that of Manilia, that was an ignorant prostitute instead this is a cultured woman who defends herself because forced, because no one takes charge of it and still, it is different, the story of Afrania, wife of senator Licinius Bucco, wich is a "provocative".
Valerius Maximus provides a version of the events linked to Gaia Afrania that collects the opinion shared by the annalists of his time who describe her as a woman who had a passion for the legal profession, loved to challenge the society of her time and never missed an opportunity to being able to speak in public and in court so much that she often went before the judges to defend not only herself but also other people.
To understand the story of Afrania it must be remembered that for Roman society there were categories of values that were discriminating in civil life and among these a priority place was assigned to the fama, or to social reputation. The prestige of a person and his right to exercise roles of command was based on his fame ...