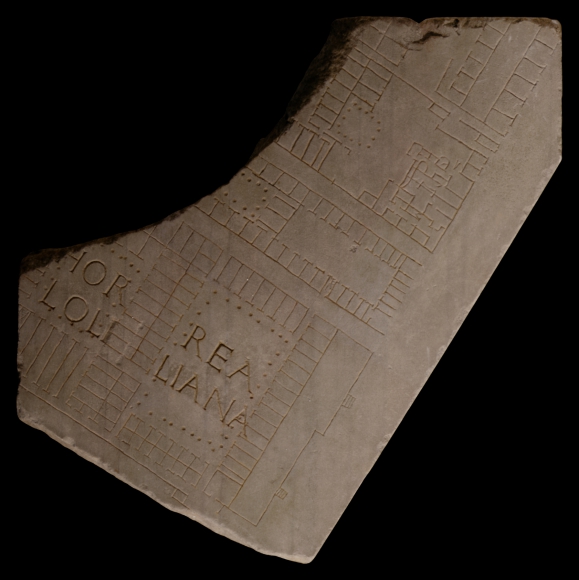 In the 1st century B.C. Marcus Lollius Palicanus, belonging to the faction of Pompeo, built on his property, located along the Tiber and near the Horrea Galbana, a new building used as warehouses for the goods that were unloaded in Ripa Marmor. The Horrea Lolliana enjoyed a privileged position on the river and were characterized by two courtyards towards which were the entrances of the warehouses that rented out, while on the outside they presented two rows of tabernae.
The gens Lollia like the other two aristocratic families who owned warehouses behind the Porticus Aemilia - the gens Sulpicia owner of the Horrea Galbana and the gens Seia owner of the Horrea Seianus -, before the construction of the Porticus in this area had their own horti, and after the Aemilii built, piers, landing places and stairways along the Tiber it was a game-force that these patricians built commercial buildings that were rented to the mercatores to deposit the goods waiting to be sold in the forums.
The viability in this area was not result of a preventive design but was outcome of paths formed according to use and with only two cornerstones, on one side the Porticus Aemilia and on the other the bank of the Tiber; the Horrea Lolliana arose just above high ground loop of the Tiber.
Scholars believe that the construction of the horrea, both the Lolliana and the other oness, can be traced back to Seius, magistratus aedile in 74 BC; certainly all three families had their greatest importance precisely between the end of the 1st century. B.C. and the beginning of the 1st century A.D. because their exponents all sided with Octavian and went through the period of civil wars without losing their possessions, indeed their roles became prominent.
Families reached their maximum power around the same time, but not all managed to keep it. Lucius Helius Seianus became the prefect of the Praetorium in 14 A.D. And, when Tiberius retired in Capri, he became the master of Rome, but ended up being executed by Tiberius who when discovered his conspiracy to take power accused him of treason and had executed him.
The gens Lollia was originally from Picenum, although there was a branch that came from Ferentun (Ferentino) and they were originally a plebeian family. One of his exponents, Marcus Lollius Palicanus, was tribune of the plebs in 70 BC, after he himself had obtained from Pompey the restoration of the office that had been suspended by Sulla. This fact was later celebrated in 45 BC. by his son (or nephew) Marcus Lollius Palicanus who, having become a monetary triumvir, issued a silver denarius with wording that remembered his ancestor and the representation of the rostra from which the tribunes could once again defend the rights of the plebs and, to the right of the currency , the newfound freedom.
The gens Lollia in the period of the civil war was always at the side of Caesar's party and the same monetary triumvir then supported Octavian who rewarded him by including, in the edict of 30 BC, the gens Lollia among those plebeian families who were named patricians. Marcus Lollio Palicanus, obtained many assignments in the provinces, managing to accumulate a considerable heritage that allowed him to participate in the elections and become consul in 21 BC ...