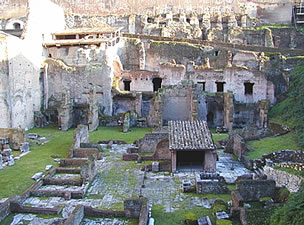 Vicus Tuscus, where had settled people from Tuscia mainly of Etruscan origin, it was the road that led from the Forum Boarium with the Roman Forum and where thronged the merchants of precious objects and refined mixing themselves with butchers, sellers of chickens and bakers.
Along the vicus were commercial buildings where goods could be stored waiting to be sold. When Agrippa was appointed edile he built many buildings and among these there was also Horrea for grain traders and cereals so that they had a place to store their wares during the course of trading.
A preliminary identification of the monument, which we knew was there because it was reported in the Notitia and Curiosum, the ancient guides for travelers of the fourth century, it must by german archaeologist Jordan who believed to single out in two fragments of the Forma Urbis Romae the its location between the Vicus Tuscus and Vicus Victoriae; although the hypothesis of Jordan in mid '900 was rejected as a result of the findings from the archaeological excavations, it had the merit of directing the first essays excavation of Lanciani that actually found the site.
Today you can see what is left of a two-story building consists of large surroundings of shape square and tuff environments that open onto a large courtyard in part with a porch and occupied later by other smaller rooms built in brick.
What remains of the building appears closed between the substructures of the Domus Tiberiana on side eastward from the rear wall of the House of Domitian and allows a fairly accurate reconstruction; it was a quadrangular building of m. 50,50 x 54,15 with a central courtyard of 32.11 x 28.84 m on which opened a gallery of arcades running along the four sides.
For each arch of porticoes corresponded a single tavern that had a depth of about 9 meters of which the rear was the storage of goods that had a ground-floor box area inside to increase the storage area; the portion of the tavern that overlooked the courtyard was the area where the trading took place. Horrea to the ground floor there were 33 tabernae with a height greater than 7 meters inside; two scales that were found near the inlets of Vicus Tuscus, brought upstairs where there was the same number of tabernae with a height equal to that of the ground floor so that the building had a total height of 14 meters, as a five-storey building.
The building must have suffered damage by two fires that afflicted the center of Rome, one of the 27 A.D. under Tiberius and then that of 64 A.D. under Nero after which Trajan decided to intervene with a restoration, also certainly it becomes necessary for the increased business needs. There was added a third floor and in the center a rectangular chapel was built in which was placed the statue of the patron genius. In the third century. A.D. It was rebuilt the temple floor with a black and white mosaic with floral and marine motifs that you can still see today and in the central part of the small arched courtyard were built with a barrel vault, which became necessary due to the increase of commercial activities ...