Heracles, Apollo and the deer Cerinite 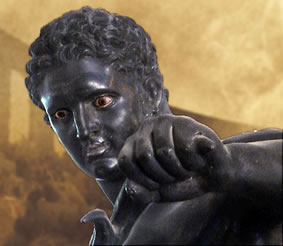 The myth of Hercules is the story of aspiration that impels man to perfection since archaic times. He was born demigod to dominate the human world to which it belongs as the son of Alcmene, but in power he is a God like his father Jupiter, and for this can aspire to immortality; to reach it, he will have to follow a path of knowledge which is known as "The Twelve Labors of Hercules".
The twelve undertakings who forces him Euristeo his teacher - according to some versions cousin, favored by Hera / Juno only to hinder it, imposes the efforts to have the merit - are all steps in the knowledge that alone can ensure the intake in Olympus .
One of the "Labors" less bloody that Hercules must complete is the capture of deer Cerinite who lived in Enoch (wine country) last land where Artemis was venerated; is his third effort, and he must not kill the deer but bring it alive and then deliver it to Eurystheus, king of Mycenae. The deer was not a wild animal, and then the trial of courage consisted in the pursuit carrying beyond the hunting ground known, in another country that was the limit of the natural world, on the border with the hereafter.
Cerinite is one of five deer that Artemis - Diana for the Romans - even a girl he had seen grazing along the banks of Anauro River, the river that marked the boundary between the world of the gods and that of the men; The young goddess had captured and tied to his chariot four deer, because the largest and most beautiful of them had managed to escape and take refuge in the hills of Cerinea near the Temple of Apollo where the goddess continued to protect her.
The deer was big and beautiful and even being female had great golden horns, his hooves were made of bronze, the sacred metal whose talismanic powers as sacred animal isolated it from the earthly ground, and his coat was spotted like a cub.
Hercules ran after the deer for twelve months until the land of the Hyperboreans, far north of the known world; until exhausted she stopped to drink at the Ladon River, the river that marks the border with the afterlife, and then Hercules shot an arrow from his bow and struck the deer to the front paws between the tendon and the bone without spilling a drop of blood. Hercules then managed to capture her, without killing, and after putting on his shoulders began way back in Arcadia.
When he was near the Temple in Enoe, the hero met Apollo and Artemis that outraged to see the animal sacred to her prisoner recalled Hercules could not keep to himself the deer because it belonged only to his own form descended from Apollo . But Hercules explained that he was obeying a request oracle of Apollo itself; only then Hercules was free to bring the deer to Eurystheus thus carrying out his labor.
But it is not the only version of the story; another story goes that Eurystheus wanted only the golden horns of the deer as evidence of achieved results, but would have been just Artemis to oppose Hercules was able to find the right compromise between the wishes of the gods: he brought the deer alive to Mycenae showing to have passed the test, and immediately took her back in the valley in front of the Temple of Apollo where he left her free again ...