Gifts and notes in ancient Rome 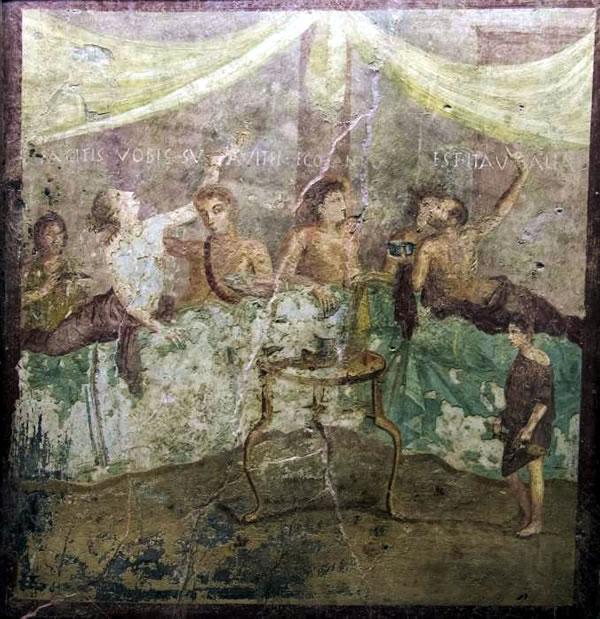 The emperor Vespasian at parties for Martiae Kalendae used to distribute to the women gifts accompanied by notes that were called apophoreta and probably the poet commissioned was Martial, Flavian cliens of long time , which has even left a collection with that name.
The apophoreta as the greek name well explains were things to take away in fact at the end of a convivium it was customary to distribute gifts accompanied by a note to the guests; at times this practice was the cue for a game, the gifts were raffled and then the combinations that resulted could also be funny and enjoyable.
The lists of apophoreta and xenia included all sorts of objects: moneyboxes, bones for gambling, chess, nutcrackers, toothpick, clean ears, combs, candles, candlesticks, balloons, fur caps, rhino horns, rattles, flies casts out of peacock , it is said that of Elagabalus destined as apophoreta ten camels and ten flies, ten pounds of gold but also ten of lead. Often the gifts were accompanied by notes with dedication in the form of couplet - the couplet was a strophe of two verses of the same size - which showed in light form the object's qualities.
Already in the first century BC you could receive as a gift a book and Martial has left these dedications:

For you this big tome: fifteen books of carmina /
It contains of Naso

Naso is Ovidius and the fifteen books are those of the Metamorphoses.

To some people I am not a poet /
But for my bookseller, that poet!

This couplet accompanied the Pharsalia of Annaeus Lucanus, one of the biggest bestsellers of the time but the poet did not much appreciated by Martial.
Also for friends who were staying in his house, the landlord was preparing other gifts that were called xenia or welcoming gifts.
Xenia at the time of Martial became the term that also indicated a pictorial genre, what today is called Still Life; in fact they were gifts that were shown only in the rooms designated for guests in the form of frescoes with false frames depicting game, fruit or vegetables. Experts believe that the designation of the pictorial genre by the same name of the gifts as convivium has prompted the poet to bring together his verses in the book entitled precisely Xenia as if to elevate couplets, which allowed him to survive in a difficult time of his life, to ars scribendi.
Normally apophoreta were distributed at the end of a banquet in the patrician houses, but everyone exchanged small gifts during the Saturnalia, the feast from which was made out of Christmas of today.
In imperial age the habit of making small gifts to the guests at banquets, was also extended to other fun moments in which priority was the demagogic and patronage aspect: in the theaters, circuses and amphitheatres, the organizer of the show, said editor , ensured the missilia, namely the distribution of small gifts. The editor's slaves, said sparsores, from the arena or the scene threw the little gifts that were different depending on the time of day. During the ludus matutinus were thrown figs, nuts, dates, cheese and bread; in the missilia of afternoon the gifts was roosters, birds, pheasants; also it could be launched tiles- tesseras ligneas cum notis rerum -, some of these (spintriae) gave right to benefits in a lupanarae but others were the tiles to chance to win something in a combined lottery to the show ...