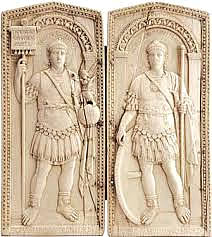 Celio Hill was a silent witness of the great changes in Rome from the archaic age to the Empire and then also of the passage from Pagan Rome to Christian Rome; on the Celio have always inhabited some of the important families of the Urbs and on the Collis Querquetulanus, starting from the first century AD, had its own domus the gens Anicia. The history of the gens Anicia, rich owner of large estates in Italy and in the Provinces, can help to understand the great, and sometimes violent, changes of the Roman state; the family has given to Rome emperors, consuls and prefects, popes, bishops and saints: Gregorovius remembers that "... the senatorial family of the Anici ... was the first to embrace the Christian faith".
The Anicii arrived in Rome from Praeneste and the first exponent of the family of which we have news is Quintus Anicius Praenestinus who was appointed curule edile ( magistrate) in 304 BC; but the first really important charge was the consulate obtained by Lucius Anicius Gallus in 160 BC. Anicius Gallus in 168 BC when he was a praetor, was the conqueror of Illyria where, with a campaign lasting just 30 days, he managed to defeat Gentius and his Illyrians first by sea and then by land; the Senate of Rome decreed the triumph for Anicius in which the defeated king, Gentius and his wife and children took part.
Anicii were a senatorial rank gens during the Empire age, but they became really important from the IV century onwards when they played a leading role in the agitated events that led to the fall of the Western Roman Empire and to the affirmation of the temporal jurisdiction of the papacy.
The superpower of Anicii began with the children of Anicia Faltonia Proba: first Anicius Probinus and Olybrius were consuls together in 395 d.C, were very young but the family was so powerful that controlled the Senate of Rome and was able to impose their election. It was then the turn of the other brother Anicius Petronius Probus who in 406 was first quaestor and then consul with Arcadius. Probinus's son, Petronius Maximus became a quaestor of Rome in 420 and advisor to Valentinian III and, being in disagreement with Etius he was no stranger to his murder. Petronius Maximus did not scruple to eliminate Valentinian and proclaim himself emperor in 455; he was emperor for just 70 days because he was assassinated by the widow of Valentinian III whom he had wanted to marry. In 472 Anicius Olybrius became emperor, - for some son of Petronius Maximus who had him marry to Placidia, daughter of Valentinian and in any case heir of the Theodosii - but only after 7 months he died of fever.
Boethius belonged to gens Anicia also; philosopher, considered one of the founders of Scholastica, he was killed at the behest of Theodosius of whom he was an adversary in the dispute over the divine nature of God. The church consecrated him martyr and saint. The Anicii were one of the first Roman patrician gens who converted to Christianity and for this they continued to have an important role in Rome managing to have three popes: Pope Felix III, from 483 to 492, who before he became Pope was married and he had a son, Gordian whom was father of another Pope, Agapetus I, also already married and father of another Gordian, father of Gregorius I Magnus: a real royal family.
Other leading members of the family were:

Gens Anician in Rome had many properties like those in Regio XIV Transtiberim along the modern via Anician; the domus on the Celio that Pope Gregorius transformed into a monastery and also a property along the Via Latina that Anicia Faltonia Proba received as a gift from the state for having salvaged the Christian basilicas. In this villa lived Demetriades who transformed it into a Christian basilica dedicated to St. Stephen protomartyr.
The basilica remained open to worship until the 13th century, it was later abandoned because it was in the countryside and could not be protected and traces of it were lost until the middle of the 19th century.
During archaeological excavation works along the Via Latina, an underground chamber of refined beauty came to light and was called “Tomba dei Valeri”, today some scholars are of the opinion that it may be the tomb of the Anicii as the property came to the Anici in the 4th century. It is a sepulcher built in 160 AD. and certainly used until the sixth century. ; it remain some traces of the upper part while the stairs leading to the vestibule of the two underground chambers are well preserved.