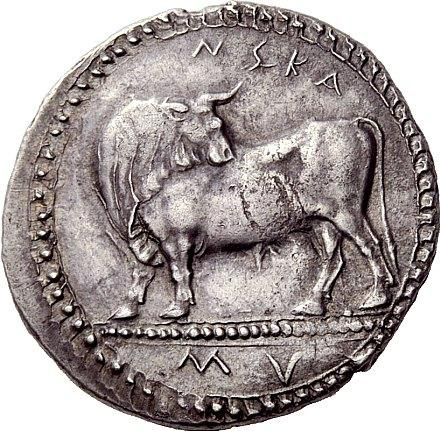 Between the slopes of the Capitolium and the Aventine hill there was a vast flat area which was the first landing place for those who, going up the Tiber, intended to arrive in Rome; it was a very low area which was often covered by flood waters.
The mythical frequentations of the archaic Rumach pass through this place; here Saturn arrived escaped to the captivity of Jupiter, here came Evander and Carmentis, here lived the Titans sons of Vulcan, Caco and Caca, here passed Hercules returning from Iberia and here came Aeneas. It was an area where the river made a loop and it was easy to dock and so did the merchants who went up the Tiber still in the middle Bronze Age (XII century BC); before the foundation of Rome this was one of the places where the Latins and Sabines, inhabitants of the left bank of the Tiber, met the Etruscan people, from the people to the Faliscans who inhabited the right bank of the river.
At the ford of the Tiber near the island the two great communication routes born for the salt trade met: the via Campana which came from the ponds of Ostia and the via Salara already a road connecting the Adriatic and the Tyrrhenian shore of the Italian peninsula along the path of sheep tracks. The Via Salara was under the control of the Sabines and the Via Campana that led to the Campus Salinarum of Ostia was of the Etruscans of Veii and Rome fought its first wars with both precisely to have control over it because the salt was white gold, a prized exchange goods.
The abundance of water in the place was also favorable for the breeding of animals, and where the herds gathered, it was easier to do the market and the hinterland breeders here came to sell their animals. This Forum was the first market in Rome and took its name from the oxen that were sold there; a large statue of a bronze bull was placed as a sign of the market, thus describing Tacitus:
A Foro Boario, ubi aereum tauri simulacra aspicimus… It was here that Evander, the mythical arcade king, built the Ara where he could have honored Hercules, the demigod who had freed the territory from Cacus, the titan son of Vulcan, who robbed and terrified the inhabitants.
The transformation of the area from a simple confluence point into a real market square was commissioned by the Etruscan kings of Rome who, starting from Tarquinius Priscus, reclaimed the area by building the Cloaca Maxima which drained the waters which descending from the surrounding hills and they made the area muddy for most of the year, moreover many resurgences were channeled, along the tracks that branched out from the Vicus Tuscus.
After the altar dedicated to the cult of Hercules, the cult of Fortuna and Mater Matuta were introduced into the Forum Boarium in the Forum; it was Servius Tullius who built the sanctuary which was then destroyed by a fire and rebuilt by Tarquinius the Superb to then be covered by the debris of one of the many floods of the Tiber. At the end of the fifth century the area of the archaic temple was raised and the Temple of Fortuna and Mater Matuta rebuilt by Marcus Furius Camillus for a vow made during the siege of Veio, later he had placed in the cell of Fortuna a wooden statue dedicated to Servius Tullius.
In front of the temple there was an altar below which the sacrificial pit opened, a well that had the altar of the archaic temple at the bottom. The sacrificial pit was not only for ex-votos but it seems that, still in the third century. BC, human sacrifices took place.
Titus Livius says that sacrificia extraordinaria were made: "a Gallic man and a Gallic woman, a Greek man and a Greek woman were brought alive underground in the Forum Boarium, in a place surrounded by stones, already for years impregnated with the blood of human victims".
After the defeat of Canne, interpreted as a sign of the wrath of the gods, the Sibillini Books were consulted to find out what sacrifices had to be made in order to appease the divinities. The books indicated precisely the sacrificia extraordinaria, this propitiatory rite was almost certainly of Etruscan origin and required that a couple of Gauls and a couple of Greeks be buried alive, the meaning was the annihilation of the enemy populations of Rome in Italic territory. The human sacrifice already appears to Titus Livius a terrible practice so much that he warns that it is an event absolutely extraneous to the religiosity of the Romans, even if the last burial rite was celebrated in 113 BC. and only in 97 BC It will be issued on senatusconsultum prohibiting them; contact with Greek civilization changed the beliefs and rituals of the Romans so much that, as Pliny the Elder also tells, they established atonement rites that took place every November because human sacrifices were an ancient custom that dates back to the foundation of Rome.
The sanctuary of Ceres and Mater Matuta was a border sanctuary and also a commercial sanctuary where between the inhabitants of Rome, protected by its walls, and the foreign merchants who landed at Portus Tiberinus there was the continuous exchange of knowledge, rites, customs in a word of cultures ...