The first fireplace in Rome at the hotel of the Moon 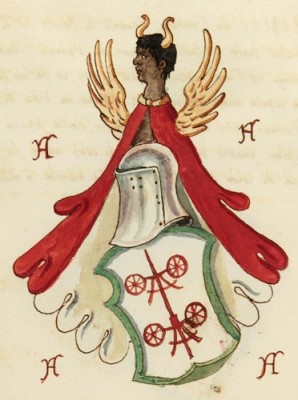 In 1368 Francis I from Carrara, a lord of Padua, came to Rome to offer his apologies to Charles VIII, that wanted to cut his head because he didn't want to recognize him emperor and so he asked Pope Urban V for help.
He stayed at the hotel of the Moon in the Parione district and discovered the Roman rooms were heated with a primitive system: people didn't use fireplaces but laid fires on the floors or inside braziers (Muratori- Rerum italicarum). As the lord of Padua found it terribly uncomfortable, he brought carpenters and artisans from his city for make two cowls with over his coat of arms. Surely Francis didn't limit himself to make them build only, but also the chimney and the shaft. The habit of building the fireplaces in this way spread in Rome and they was called Roman fireplaces.
In 1277 the first modern fireplace arrived in Venice from the northern countries, so long time ago it was present at Padua, the city of Francis from Carrara.
The mild climate of The Eternal City allowed to heat the houses as in the Middle Ages or as in ancient time when the Romans laid fires in the middle of the insulae rooms. The hypocaust was used to heat in ancient Rome: a system where the hot air coming from the furnace (praefurnium, propnigeum) circulated under the floors and inside the walls, for the elimination of the fumes there were special pipes and the distribution of heat it was regulated by increasing or decreasing the fire power. Nevertheless only the patrician and riches' houses or the baths had these facilities, while the braziers placed in the center of the rooms were used in the insulae or in other buildings; the smoke was dispersed in the room and then came out from a hole on the roof and an opening in the wall.
The sparks and the accidental tipping over of the braziers were the main cause of many fires that devastated Rome.