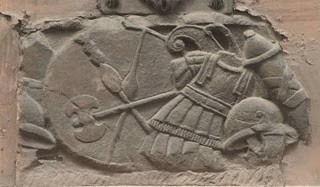 Rome at the end of the first century BC It was already a very beautiful city, rich in monuments and with a high population density; most of the inhabitants lived in insulae, multistoried buildings dwellings that had stairs, balconies and wooden porches where they lit fires to cook and where the light was that of the oil lamps; in these environmental conditions it was very easy to burst fire, and in fact in Rome there was no day passed without fire so that Juvenal wrote "... when will can I live where there are no more fires and where spend nights without alarms ".
At the time of the Republic were designated the 'triumvirate nocturni' with the task to ensure the night security and to give the alarm and groups of slaves were kept just outside the walls, with the task to intervene to put out fires.
The efficiency of this type of organization was very limited and then Augustus in 22 BC decided to create in Rome a real body of firefighters with the task to intervene to put out fires but also for the supervision of negligent or deliberate behavior worse. Initially the body was formed by five hundred slaves, under the orders of a magistrate, but with the growth of the city, the organization of "vigiles" soon came to seven thousand men.
The Vigiles were urban military bodies, divided into 7 cohortes, so that each assured vigilance in 2 of the 14 Augustan regions. They had their barracks (statio) and the gatehouse (excubitorium) inside the Pomerio because the readiness of intervention was essential for the validity of the key service of the body, namely the fight against fire.
The Regio VIII Via Lata and the Regio IX Circus Flaminius were entrusted to I Cohors and had his Statio in the center of Urbe - the Lanciani archaeologist believed was near the current Piazza SS. Apostolic, here there was also the headquarters of the command of all the cohorts; II Cohors watched over Regio V Esquiliae and Regio III Isis et Serapis according to epigraphic evidence was located near the current Piazza Vittorio although they have never been found archaeological remains; The Statio III Cohors was in an area in front of the current station Termini and controlled the Regio VI Alta Semita and Regio IV Templum Pacis; on the little Aventine was the barracks of the Fourth Cohors to protect the Regio XII Piscina Publica and Aventinus Regio XIII; on the Coelian Hill was the Statio of Cohors V who controlled the Coelimontana Region II and Region I Porta Capena, the barracks was discovered thanks to an inscription found near the entrance of Villa Celimontana; the Cohors VI had his Statio in the area today's Church of Consolation in Regio VIII Forum and also watched over on the Regio VII Palatium; the Regio IX Circus Maximus and the Regio XIV Transtiberim were controlled by Cohors VII who had the Statio near the Circus Maximus and the excubitorium in the Regio across the Tiber.
The archaeological excavations have been identified with certainty two statio, that of Cohors V on the Coelian Hill - who chaired the Regio I and Regio II, then from Porta Capena to the Servian walls up to Almone river and around the Caelian - and that of Cohors VII in Trastevere of which in the late nineteenth century, relevant and interesting remains were discovered in well 8 mt. below the current street level, although archaeologists are inclined to believe that the site in Trastevere is the excubitorium , namely watchpost, rather than the statio; it is still the oldest barracks of the fire brigade in the world. ..."