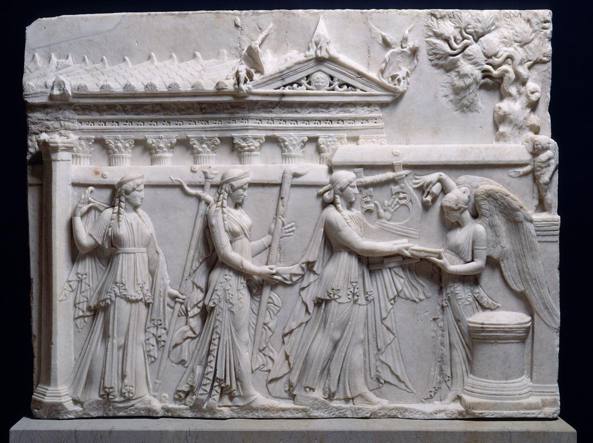 For the Romans there was a sacred time and a profane time and, when spring began the Pontifical College of met to establish, following the lunar cycle, how the days would fall and therefore the days in which one could devote oneself to work and duties of the state and the other days that had to be dedicated to the gods. After establishing the days, the official calendar was made public by affixing bronze plates but more frequently by marble tables.
The Romans called the calendars Fasti because they served to know on which days the administrative and political activities could be carried out, the religious ones and the days when nothing had to be done; there were Fasti days in which everyone enjoyed the protection of the gods and Nefasti days in which no decisions had to be made.
In all the empire municipia, the highest religious authorities established the cadence of days and above all the recurrences of religious festivities which, moreover, could also be not perfectly coinciding as was confirmed by the findings of Fasti's tables in different areas of the empire.
The tabulae that communicated to the people how the time had been divided were exhibited at Kalendae Martiis, Calends of March, or at the beginning of the year which was fixed with the first month of nature's awakening and the resumption of all activities; the first month was dedicated to Mars, the god who presided over revivals in ancient times. In 153 BC it was decided to change the start date of the year which was fixed at Kalendae Januarii, the first day of the month dedicated to Janus, god of every beginning, and day of taking office of consuls.
About thirty of these tabulae have been found in various cities of the empire including, besides the famous Fasti Capitolini found in Rome, the Fasti Anziati, the Fasti Caeretani, Fasti Praenestini, Fasti Amiternini, Fasti Verulani, Fasti Privernati, Fasti Venusini, Fasti Maffeiani and others still both urban and rustic.

Fasti Capitolini
Many fragments of marble slabs recognized as epigraphs and immediately identified as Fasti were found in 1547 during the works for removal a furnace that was located at the northeast corner of the Roman Forum. The place of discovery coincides with the site where the Regia was located, the building in which these slabs were posted by the Pontefices who had the task of redrafting them. The task of return them to the knowledge of the whole world was entrusted to Michelangelo who in that year was in charge of restoring the Campidoglio Square. Michelangelo decided to insert the Fasti slabs to decorate the back wall of the “Palazzo dei Conservatori” courtyard, where they remained until 1586 when were restored and brought inside the Palace where they are still located in the "Sala della Lupa".
The Capitoline Fasti are two lists concerning the Fasti Consulares and the Fasti Triumphales; the list of the Fasti is composed of 30 large fragments that show the list of consuls from 493 BC to 19 BC, while the Fasti Triumphalis report the names of the generals to whom the Triumph was granted from 753 BC to 19 BC In these Fasti there is the testimony of the Triumphs recognized to Romulus precisely starting from the Ides of March of 753 BC.

Fasti Anziati
Between the seventeenth and nineteenth centuries, during several excavations in the Nero's Villa at Antium, over 300 fragments of a marble tabula were found and in which was recognized a calendar of m. 2.5 in width by 1 m. of height dated to the first half of the 1st century BC, which reported the Fasti earlier 55 BC ...