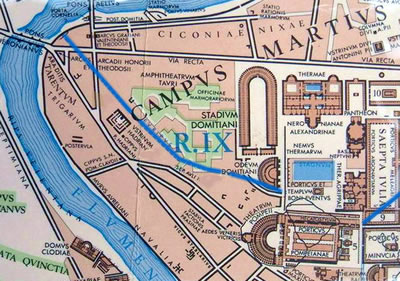 From the Pond of Agrippa an artificial channel crossed the Campus Martis channeling the excess waters towards the Tiber. The Euripus, built in the Augustan age and fed by the Aqua Virgo, played an important role in Agrippa's building program in the western Campus Martis, in the use of water as an element of urban characterization, according to a model of typically Hellenistic inspiration.
The canal, uncovered and navigable, had a width of just over three meters for a depth of about 1.70 meters, with side quays in travertine blocks. Two long walls (one in reticulated work and one in tuff blocks) flanked it, while on the northern side ran a paved street. A series of bridges, coated by marble and travertine, were placed at the road crossings. The canal, recalled in the treaty about Roman aqueducts by Frontinus for the large water flow, and depicted on the Severan marble plan of Rome (fr.252), partially follows the course of the current “Corso Vittorio Emanuele II”, dividing Campus Martis in two urban areas, central and western.
The realization of the Euripo was necessary to recover the marshy lands of the Caprea swamp of which Agrippa needed to realize his grandiose constructive program that included, besides the Pantheon also the baths and the gardens, all buildings that he bequeathed to the people of Rome.
In the gardens, Agrippa had also placed the large base bearing the bas-relief, known as the Fallen Lion where a fighter was shown seated on a large lion at the foot of the Olympus, and recognized as a work by Lysippus now lost. Modern scholars are of the opinion that it was the base of the bronze statue of the "Resting Boxer" now in Palazzo Massimo, Museo Nazionale Romano in Rome.
During his magistracy of curator aquae, Agrippa took the Aqua Virgo to Rome to feed not only its thermal baths, but for all the Romans who lived in the insulae of Campus Martius. The water that was used in the baths came out clear and was channeled into the Euripus Canal which ran right between the baths and the body of water that Agrippa built in the gardens and of which Ovid left us the description (De Ponto li. I , VIII, 38)

Gramina nunc campos pulchros spectantis in hortos stagnaque ed Euripi, vigineusque liquor
The clear water of the Euripus attracted the Romans and Seneca tells us that they used to go swimming in all seasons of the year probably because the hot water of the thermae arrived , en fact Stazio tells how to swim in the Euripus was beneficial to health.
The poets of the time praised the beauty of the surroundings and the purity of the water. With pride Seneca, in his old age, he mentioned his habits when as a young man he used to dive in the Euripus cold waters on the first day of the year.
Strabo also tells about Euripo; according to him the canal passed near a grove that divided it from the so-called Pond of Agrippa, obtained by exploiting the conformation of the land but making it healthy with the exchange of water through the Euripus. The Pond was so large that, according to the story of Tacitus, in 65 CE Nero built a raft on that he spread a sumptuous banquet; the raft sailed in the pond pulled by two rowing ships, adorned with gold and ivory.
Agrippa gave the name of Euripo to the canal he had built because in this way the Romans called the canals, ditches or pipes that were used to channel water into urban centers ...