When elephants lived in Rome 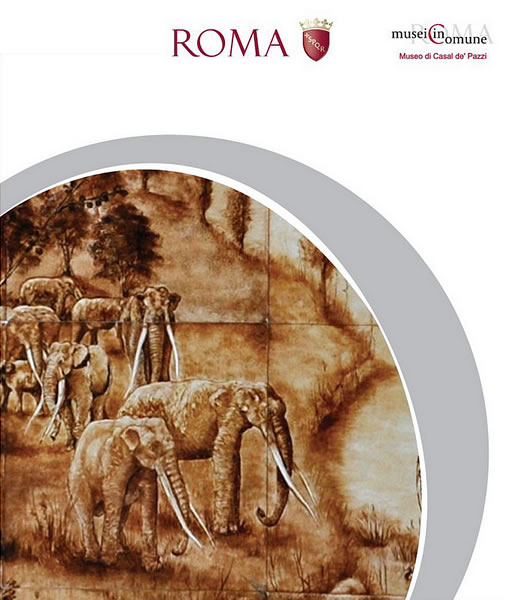 200,000 years ago elephants lived along Aniene river. The valley of Aniene, the tributary that joins the river Tiber at gates of Rome, was the natural habitat of extinct animals that divided it with men who were the ancestors of the Italic aborigines.
The confirmations of these testimonies of prehistoric life in Rome were found on the Casal de 'Pazzi site, an area that until the second half of the last century had not been involved in any type of urbanization; this is the reason because finds dating back to the Pleistocene, which are generally identified on lake grounds, have been found almost uncovered. It is a find of great value considering that Rome and its surroundings is an area of high anthropization for at least two thousand years.
Conservation is probably due to the consequences of eruptive activity of Volcano Laziale, whose crater (now occupied by Lake Albano) was active up to 5,000 years ago, and to other phenomena such as lahar, mud flows composed of pyroclastic material and water that flow along the slopes of the volcano and then along the river valleys incorporating all that they encounter along their way. These events that according to testimonies would have occurred again until the IV century. B.C. making the area unsafe for human settlements.
Casal De Pazzi is a site in the outskirts of Rome which is only 10 kilometers from Piazza del Campidoglio , located between Via Tiburtina and Via Nomentana, the two roads descending from the hills of the preappennino and 200,000 years ago it was covered by woods and plains, ideal habitat for large mammals now extinct such as the Elephas antiquus, or Elephant with straight tusks, of which one has been found a tusk long m. 3.5.
Another animal that frequented the banks of the Aniene was the Ur or Bos primigenius, a wild bovine that could be tall at the withers up to m. 1.80 and then other species no longer present in the area as the Hippopotamus amphibius, practically the same as those found today only in Africa, or other species such as wolf and deer, now only found in natural parks. The same habitat also shared some species of water birds such as the Greater White-fronted goose, the teal, the gadwall and the widgeon.
In the same Pleistocene deposit, Paleolithic artefacts have been found but they could refer to human settlements that were located upstream and that the floods of the river dragged along; These are mainly scrapers but also awls, drills, scratchers ...
In total, over 2000 animal fossils have been discovered in the deposit; more than 1500 flint artifacts and also a part of human skull whose characteristics are similar to those of the so-called Saccopastore Man - a location about 3 km further downstream - that is, a human type with both Neanderthal and other features own of homo habilis.
In the site, discovered in 1981, an archaeological excavation was carried out that led to the creation of a museum on an area of 1,200 square meters, where in addition to visiting the deposit with the vision of animal fossil finds, including striking the long tusks of elephant, we are witnessing a film with 3D virtual reconstruction of the flood of the riverbed and the animated video of the life of 200,000 years ago with the succession of animals descending to the river.
Museum is open every day, only in the morning, with free admission.
Info: www.museiincomuneroma.it