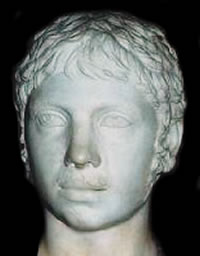 The young son of Julia Soemias and the late Senator Sextus Varius Marcellus, was acclaimed emperor by soldiers of Legio III Galica and Legio II Parthica stationed in Emesa, in May 218 AD. They were his mother and his grandmother Julia Maesia, sister of Julia Domna, wife of Septimius Severus, who claimed his right to succeed Caracalla, but not so much for the royal kinship, but because they did believe the legions that the real father of Varius Bassianus, this it was his name, it was truly Caracalla, a fact that seemed confirmed by a certain resemblance as well as by the presence in Rome of Giulia Soemias at the time of conception.
Grandmother Julia Maesia cleverly promised soldiers to share with them the wealth her family had accumulated over the years she had been at the court of Septimius Severus and Caracalla; his family was not Roman, on the contrary he had Arab origins descending from the principles of Emesa which ruled as vassals of Rome in the first century. A.D.

His full name was Sextus Vario Avitus Bassianus and in his city Emesa he was the priest of the temple dedicated to the God Sun as the office was hereditary in his family. Even before arriving in Rome had assumed motu proprio all offices of princeps and when he arrived in Rome he brought the Baetylus of Emesa, the sacred stone, for which he built a magnificent temple on the Palatine Hill dedicated to the God Sun.
The Baetylus of Emesa was the Black Stone fallen from the sky (a meteorite) and had the appearance of a cone with a circular base and a pointed top, on the surface a figure in relief represented an eagle with a snake in its beak or even , as Herodian reports, the shape of the sun and its planets not traced by human hands; the stone did not represent the God of the Sun, Baal, but his house.

He was 14 years old when he became emperor under the name of Marcus Aurelius Antoninus, but in Rome he arrived only at the end of 219, almost 2 years after his proclamation as emperor; the ceremony with which he entered in Rome surprised and perplexed the whole population. The Romans were amazed by the incredible procession of bizarre characters, by the great black stone that was carried on a wagon and by the clothing of the new emperor: he was dressed in his priestly robes of red and golden silk, he had a high tiara and then necklaces and bracelets of gold and his face made up with black eyebrows and cheeks tinged with red.
The young emperor wanted to introduce in Rome the worship of the god Baal, so he changed his name to El-Gabal, whose etymological meaning is "Lord of the mountain" as the final expression of a symbolic chain that made the Black Stone the home of the Sun God and of the young emperor the keeper-master-lord of the stone, then El Gabal. For Rome, which was invested by the new eastern religion, the new cult honored the Sun God and even the name of the emperor was changed to Heliogabalo believing that the very young emperor was the high priest of God Helios; he wanted to be the spiritual guide of the Roman Empire and to impose the worship of the Sun God on all the other cults: the absolute novelty of the cult of El-Gabal was the monotheism that was transformed into supremacy towards the other foreign divinities that had to be subjected.
Elagabalus was so committed to his religious activity that left the government of Rome to his mother Julia Somea and his grandmother Julia Maesia ...