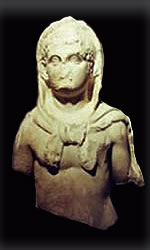 The Domus Gallonii is a rustic villa discovered along Via Tiburtina, in the 90s of the last century, during the construction of the new agri-food market in Rome and in which a statue of "Hercules child" with a suggestive votive dedication in marble to the demigod was found.

The dedication is for a vow that the procurator of the Villa dei Galloni, Sabinus, had made to Hercules and that was carved on a slab of travertine then used as a threshold of an environment in the fifth century. A.D.
The dedication to Hercules is testimony of the cult great diffusion throughout the territory covered by the Via Tiburtina which from Rome led to the most famous sanctuary dedicated to him in Latium, that one of Hercules Victor in Tibur.
That the statue belongs to a child Hercules is not so unusual, just think of the Child Hercules choking snakes exhibited at the Capitoline Museums or also the other found in the 18th century in the “Villa dei Quintili”, and now at the Hermitage, ending without forgetting the statue of young Hercules there was in the Sanctuary of Tibur.
According to the myth, Hercules was a demigod born from Alcmene and Zeus, who abused of her end impregnated taking the form of her husband Amphitryon absent for an expedition; but Hercules, son of a God and a woman, to conquer immortality deal with the famous twelve labors that forced him and travel around the then world known. Precisely because Hercules had to travel the world, he also became the protector of transhumant shepherds and merchants; the Tiburtini mercatores were very enterprising and during the second century. B.C. they became very wealthy because they came to operate in one of the most famous markets in the Mediterranean, the island of Delos. For the great fortune they encountered, they erected a large temple in Tibur, the huge Temple of Hercules Victor, to their patron god.
The cult of Hercules Victor in Ti bur has a unique character of which the epithet “sospitali custodi” in the invocation to the god is the unequivocal attestation; in the ager tiburtinus, Hercules was honored as a "protector" by indicating a relationship between the god and the man to wich a divine feeling of involvement is not extraneous and not traceable in the cults of other deities.
The dedication to Hercules as "custos et sospitalis" by the procurator Sabinus, founded in the Villa dei Gallonii on Via Tiburtina, and the discovery in the Settecamini area of an inn or cauponia dedicated to the not-distant Hercules Tiburtinus, are the testimonies that the Hercules venerated in Sabine he was the most important god in an area with a strong rural vocation and whose cult was probably closely connected with that of Hercules who was venerated at the Ara Maxima in the Forum Boarium.
The villa was discovered in 1985 in the area where the construction of the CAR (Agroindustrial Center of Rome) was underway on an area sold by the Lazio Region, owner of the large "Tenuta del Cavaliere" where extensive cultivations of alfalfa were carried out for the animal feed; just this type of crops that do not require deep plowing has contributed to preserving the archaeological area which was found at 50-60 cm in depth.
The complex of buildings found along the Via Tiburtina was owned by a family of equites, the Gallons who had their Rural Villa here, which was managed by the procurator Sabinus ...