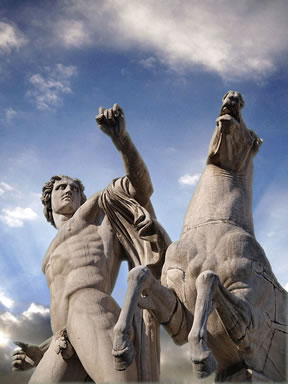 In the Forum, three solitary columns testify after 2500 years the cult of Rome for the Divine Castores, the Dioskouros (Dioskouroi), the heroes who conquered the immortality and could to live forever in the sky in the form of Gemini constellation.
The myth of the immortal twins born in Greece and their history is intertwined with many other of myth: they are the sons of Zeus and Leda; They are raised as children by Tindaro, husband of Leda and mythical king of Sparta; are brothers of the beautiful Helena for which break out the war of Troy and Clytemnestra, wife of Agamemnon; They are part of the Argonauts who accompanied Jason to Colchis to conquer the Golden Fleece; They kidnap and then marry Ilaira and Phoebe defeat in Theseus fighting that had kidnapped Helena and after this test of courage and daring, Zeus gives them immortality.
Until then they were beautiful athletes only: Castor was a wrestler and Pollux a boxer; they become immortalswill be accompanied by a horse always and receive by Poseidon the power to rule the wind and the sea.
From the city of Sparta, closely linked to the Dioskouros cult, that came in the colony of Taranto in Italic ground, and here for them it were built a temple; from Magnagrecia the cult came to Rome as it was ascerted by an epigraph and clay votive material found in Lavinium in a temple where it carried out the initiation rites of young people.
When the myth of Castores arrived in Rome was adopted soon for the similarities in their story with that one of the Horatii and Curiatii or perhaps even wanting to assume a deeper reason a purifying and higher cult a in the city that based its roots on the fratricide Romulus kills Remus in a struggle for supremacy while Pollux, immortal, to not abandoning his brother is willing to spend half his time in Hades, together in the life and in the death.
The Dioskouroi were the champions of Laconia (kingdom of Sparta), which was opposed to Messenian on whose throne sat Aphareus who had two sons Lynceus and Ida, said the Aphareides, even they champions who took part in the expedition of the Argonauts; Dioskouroi when saw the promises of brides Aphaareides, Phoebe and Ilaria felt themselves "inspired by love" and them carried off. Future spouses pursued the kidnappers and Lynceus killed Castor and then was killed by Pollux; the result of the story, complies with the myth that wanted Castor son of Tyndareus, then man, and Pollux son of Zeus and so demigod and, also connects with the legend that Jupiter had given them the opportunity to stay together forever, passing one day in Olympos and a day in Hades.
This vulnerability makes the Dioskouroi acce sible deities and most popular that capricious gods of Olympos surprisingly; are gods of light, stars of the morning and evening that ply the skies riding their horses and in fact are revered as divine knights to which you can ask for protection and be accompanied in the changing way of life ...