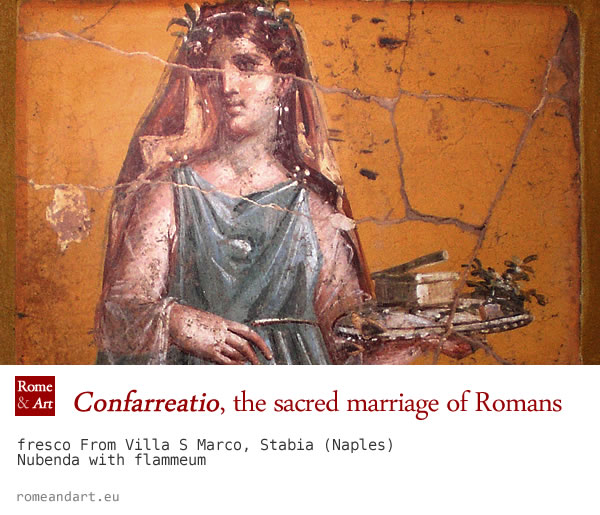 The rite of archaic marriage was called Confarreatio and dated back to the time of the monarchy; its name derived from the spelled focaccia (panis farreus) that the spouses parted to symbolize the future life together that they dedicated to Juppiter Farreus. In the Republican age it became the sacred marriage reserved only for the Flamines Maiores and the Pontifex Maximum and for the patricians who could have access to those offices.
Sacred marriage entailed many duties and limitations which for the groom derived from his office and for the bride from marriage. Some limitations and prohibitions established in archaic time were considered outdated at the beginning of the Empire so that, first Augustus, and then Tiberius found themselves enacting laws that untied the spouses from certain limitations which, except for the divorce ban, concerned mainly the modality of participation in social life.
This marriage was said to have been instituted by Romulus, initially practiced only by the patricians and then reserved only for the Flamines, that is, the priests. The rite of marriage for Confarreatio was solemn and was the consecration of a union by the will of the god, so much so that the children born from the marriage celebrated with this rite were the only ones who could become Flamen maior (priest of Jupiter or of Mars or Quirinus) . The bride of Flamen Dialis, a priest of Jupiter, became Flaminica Dialis; if the flamen dialis was the personification of the god, his bride acquired the same sacredness so much more that she had to be the mother of a son who could in turn be named flamen.
The cerimonial required that the bride had beyond traditional clothes for the wedding even a red veil, the color that symbolized thunderbolt , the representative object of Jupiter of which the groom was the priest; for marriage all Roman brides wore the veil called flammeum as a sign of good omen as it reminded that one of flaminica she could not divorce.
The sacred marriage was not only a solemn ceremony with juridical and social implications for the two nubendi but it was also a great representation of Roman culture; its complexity derived from being almost a propaganda moment for the gens to whom the newlyweds belonged.
The ceremony was very complex and articulated and everything had to take place in the presence of ten witnesses, all born from marriages celebrated with the confarreatio, the Flamen Dialis and the Pontifex Maximus; the ceremony included rituals that had to take place according to a precise sequence and before the ceremony a sheep had to be sacrificed and its fleece, called pellis lanata, must have been used to cover the seats on which the bride and groom stood during the ceremony.
According to the story of Servius, a Roman historian, the spouses sat on sellae duae iugatae; for this aspect of the rite some scholars interpret it not as two seats linked together but two seats placed under a yoke that symbolizes the doorway that marks the passage to married life.
The ceremony began only if omina (omens) were favorable, ie there weren't earthquakes or hurricanes; then the tabulae nuptiales were signed, the real marriage contract in which the bride's dowry was established.
There are not many indications about the places where the ceremony took place but surely the spouses and the guests had to move so as to be able to perform the sacrifices at the altars of the gods. Almost certainly the first part of the ritual took place in a Temple of Jupiter precisely because the confarreatio provided for the offering of panis farreus to Jupiter.
The bride had to wear a red veil, called flammaeum, which covered her head and subsequently had to perform, together with her husband, three ritual rounds around the altar, walking to the right, for this reason this ritual was called dexteratio.
The ceremony continued with the division of panis farreus, spelled focaccia seasoned with mola salsa that was prepared by vestal virgins, the pronuba delivered one half each to the nubendi who, eating it symbolically, accepted to share their life while to Jupiter, beyond the focaccia, an animal was sacrificed. After this first part, the ceremony moved to the Temple of Juno where the ceremony orchestrated by the pronuba continued.
It was the culminating moment of the ceremony, the dexterarum iunctio, the union of the hands of the spouses with whom they expressed their consent; this phase of the ritual took place under the supervision of the pronuba, a woman usually elderly and univira, that is married only once, as a good omen for the duration of the marriage. The pronuba represented Junno and Venus and it was she who led the new bride and united her to the groom by joining their hands and pronouncing the formula "te isti viro do, amicum, tutorem, patrem" (I give you this man as a friend, guardian and father).
After the nubendi, accompanied by their relatives, the Pontifex Maximus, the Flamen Dialis and the ten witnesses had to sacrifice an animal to Juno, almost always a white heifer that was the sacred animal to the goddess.
After the sacrifice, the ceremonial of the dies nuptialis involved the nuptialis dinner, in which all people who had attended the wedding took part, and it developed in the house of the bride's father (although it could rarely happen in the groom's house) and began with the acclaim "feliciter", wish for happiness addressed to the spouses.
After dinner was distributed to the guests the wedding cake called mustaceus or mustaceum, whose ingredients were flour, wine, cheese, anise and was baked on a bed of laurel leaves ...