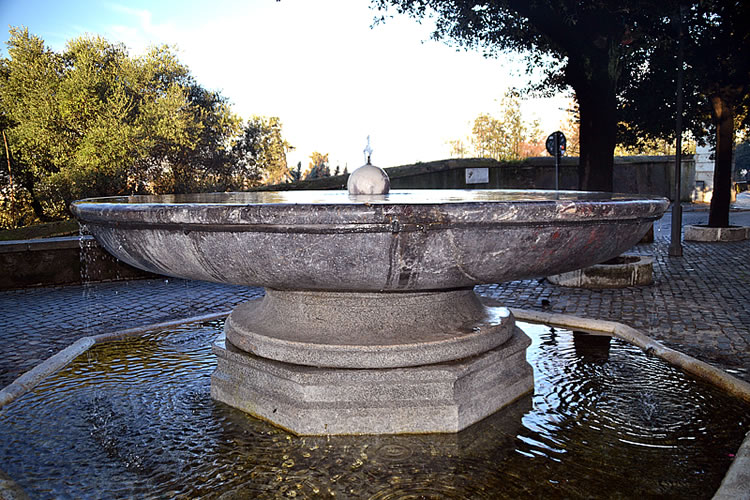 On the Pincio hill, right in front of Villa Medici, there is a fountain that despite its structure is essential and not showy embodies art, history and legends perhaps like few others in Rome and would be almost unknown if it weren't linked to an anecdote about Christina, the Queen of Sweden who in the seventeenth century was one of the most eccentric and in sight personalities in Rome.
When Ferdinando de 'Medici in 1597, wanted to put a fountain in front of the villa he was building on Mons Pincii, he did it for aesthetic and architectural reasons but also to give the people the possibility to draw water for daily needs.
The water available was abundant because a connection had been made with the Acqua Felice aqueduct that was added to the Acqua Vergine aqueduct so that all the fountains in the villa could be given water. The Cardinal wanted to create a mirror effect for the façade of the Villa towards the Platea Trinitatis and a harmonious alignment with the other fountains - Fontana dei Delfini, Forntana del Mercurio, Fontana del Piazzale and that one of the balcony of the Great Hall - which are located inside the Villa, today seat of the French Academy.
He entrusted Raffaello di Pagno with the task of finding the architectural invention that would allow him to realize his understanding using the architectural elements of antiquity that "were getting along" in that period in the city and of which the Cardinal was an attentive and in love collector .
The architect thought of using a large African marble tub that had been brought into the garden of the villa by Cardinal Alessandro de' Medici (later Pope Leo X) when he was the owner of the Basilica of San Pietro in Vincoli; it had been found during the excavation works in the forecourt, and then came from the Baths of Trajan over which the basilica had been built.
Raffaello di Pagno in the fountain desired by the Cardinal, according to ancient art experts and historians, managed to achieve a correct recomposition of a Roman fountain as it corresponds to the description made by Rucellai of the large fountain, which collected the water of the ancient Fons Euripi, which was located in front of the Colosseum (before Bramante dismantled it to reuse the labra in the Belvedere fountain in the Vatican) and which was to resemble the large public fountain placed in the Comitium.
The fountain seems to have been completed when Ferdinando had already returned to Florence and become Grand Duke of Tuscany, although the great project of harmonious alignment between outside and inside was abandoned. To Annibale Lippi was given the task of completing the fountain which ultimately resulted consistenting in an African marble basin mounted on a granite base resting on an octagonal basin of gray granite from the quarries of Mons Claudianus in Egypt. In the center of the tub was placed a lily, flower of the coat of arms of Florence city, but soon replaced by a sphere of pavonazzetto marble from which a high spurt of water came out.
The marble sphere in the center of the tank ade born the legend of the cannonball that the Queen of Sweden, for an unclear reason.
Just from the marble sphere in the center of the tank the legend of the cannonball was born that the Queen of Sweden for an unclear reason - some tell to announce a delay at a lunch with the painter Charles Errand, others out of mere unconsciousness during an evening of revelry – she would have fired from the ramparts of Castel Sant'Angelo going to hit the door of the villa on which you can still clearly see the imprint left by the blow. That it is a legend is certain because a cannonball could not have covered the distance as the crow flies of almost two kilometers between Castel San'Angelo and Villa Medici.
The fountain is also known as the Corot Fountain because of the oil painting on canvas that the French painter presumably made in 1825; the fountain, due to its position, was painted by many artists including many French painters winners the Grand Prix de Rome who stayed at the Academy such as Fragonard, Hubert Robert, Vernet beyond Corot who made three paintings by Fontana different, but also Germans, Olondese as Van Wittel, known as Vanvitelli, English, Swiss, Danes and many Italians.