Callixtus, banker, convict and then Pope 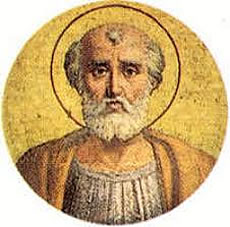 The Callixtus's life has many shadow areas; he was Pope at a time when the Church was already mauled by clashes of opposing factions so much that he died stoned to death in the bottom of a well and for this consecrated martyr of the Roman Church; his name remained linked to the hypogeum cemetery of the first Christians on the Via Appia, the Catacombs of Saint Callixtus, of which he was the first custodian.
Callixtus was born in the Regio Transtiberim in an area called "Ravennatio" because the crews of the Ravenna fleet were quartered; he was a slave of Marcus Aurelius Carpophorus, freedman of Commodus, and when he converted to Christianity, Callixtus also joined the new religion. Carpophorous was very rich and confiding in Callixtus to whom he entrusted the management of a bank in the Regio III populated mainly by Christians.
The bank failed in 185 BC and it was due to the difficult economic situation that the Roman empire crossed under Commodus and to some errors in the granting of credit to Jewish merchants that it seems they did not return the loans. Callixtus fled to Portugal where he was captured and taken back to Rome; here the prefect of the Urbe Seius Fuscianus, condemned him "ad metalla" (to forced labor) in the mines of Sardinia. From the mines of Sardinia he was saved by Marcia, the concubine of Commodus, who was of Christian faith and Callisto was already a deacon; when he returned to Rome, he was still removed by Pope Victor and lived a few years in Antium.
There is no news of what he did when he was in Antium, but he did not stay there for a long time. Callixtus was a capable and enterprising man, so much so that the new Pope Zepherinus called him back to Rome and commissioned him to fix the cemetery on the Via Appia; here Callixtus built the complex underground cemetery that is known by its name still today.
He also had good diplomatic skills and obtained that the catacombs, a private institution, were also recognized and authorized by the prefecture of Rome. The catacombs were common cemeteries where everyone had to pay in proportion to their chances for the burial of that a sort of guild under the command of Callisto was occupied; in fact the Catacombs on the Via Appia were the first communal property of the Roman Church. The construction of the cemetery was a great success, so much so that Callixtus became the Pope's adviser who appointed him archdeacon and to whose death he was elected as his successor.
He became Pope while he was Emperor Elagabalus and then again with Alexander Severus during the regency of Julia Mamea; under Elagabalus the life of Christians encountered some difficulties but with Alexander Severus it can be said that there was freedom of worship and indeed Alexander Severus among his gods also prayed to Jesus Christ.
Callixtu had many problems during his pontificate but all within the hierarchy of the church and above all with Hyppolitus, who later became the first antipope, with whom he entered a violent conflict for the so-called Edict of Callisto. The edict allowed those who had committed adultery and fornication to go back to the sacrament of communion after a proper penance.
In reality there were also other reasons that concerned a permissive interpretation of Catholic doctrine, above all for the granting of Christian forgiveness to those who, after having adhered to heresies, asked to return to the Christian church. It seems that the prohibition of marriage between consanguines is due to him and moreover Calixtus arranged that the concubinage relationship between a matron and an inferior had for the Church the same value, and obligations, of a legitimate marriage ...