Caligula and the mystery cults 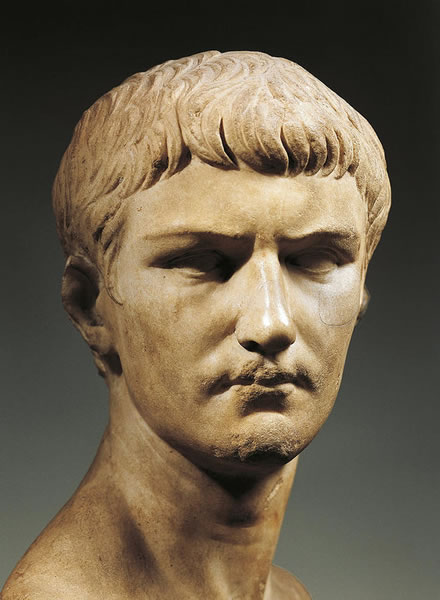 Gaius, called Caligula, was the third son of Germanicus and Agrippina the Elder, during his imperium he had unacceptable behavior for Roman morals and incomprehensible even for those who followed him above all out of fear; this behavior was imputed to the observance of mystery cults or to madness, but it is possible that there is another interpretation.
Agrippina used to follow Germanicus in the destinations that his duties involved and also followed him during hers pregnancies and with the young children - Caligula 2-year-old was in Germany with his parents during the revolts of the Rhine legions, Julia Agrippina was born in Germany and Julia Livia at Lesvos and, as Tacitus recounts, Germanicus made a trip to Egypt where it is known for certain that he followed a Theban priest while telling him the story of Ramses II and his people. Maybe Caligula was with Germanicus or maybe not, but after the death of his father and his mother's exile he remained with his great-grandmother Livia until her death and then was entrusted to his grandmother Antonia Minor.
The young Gaius from 27 to 29 BCE living in the Antonia house breathed east air because his grandmother not only knew and spoke Greek but also had a great knowledge of Egypt to which she linked by memory of his father Marcus Antonius and the relations always alive with her sister Selene, Cleopatra's daughter. In those years the future king Herod also lived in his house.
Caligula probably in the years with his grandmother Antonia internalized a feeling of belonging to a culture "other" different and distant from the Roman culture that was represented by those who had decimated his family. In those years, while the brothers were imprisoned and killed and his mother exiled, Gaius Caesar demonstrated a chameleon ability that allowed him to survive: it was probably in those years that he approached the Isiac cults already widespread in Rome.
About the cult of Isis, goddess of nature, fertility and mother of all things in Rome there are testimonies from the end of the second century. B.C. when it arrived with the slaves of the east, but soon spread mainly among the lower strata of the population. The patricians opposed this oriental cult and the Senate in 64 B.C. declared his opposition to it but there was almost a popular uprising for that and so it was established that the cult of Isis could be followed only outside the walls of Rome.
The oldest place of isiac worship in Rome was the Iseum Metellium, founded by Quintus Metellio Pio in 80 BC, identified with the Iseo existing in the Augustan Regio III of which some structures of the building would survive between Via Labicana and Via Merulana , in Piazza Iside. But perhaps the most famous is the Iseum Campensis, which was located in Campus Martio where the Aqueduct of the Virgin water, wanted by Agrippa, crossed the Via Flaminia; it was built by the triumviri Octavianus, Marcus Antonius and Lepidus in 43 BC currying favour with roman people and when he became princeps , while not conducive to worship, he preferred not to make any decision and the cult of Isis continued having his followers in Rome.
According to some scholars, the Iseum Campensis was destroyed by Tiberius and then it would have been Caligula to have it rebuilt, although almost certainly the observance of the rituals by Caligula took place in a private environment: the Aula Isiaca – wich means “ Room of Isis” - on the Palatine Hill. It has been called Aula Isiaca, an underground room discovered on the Palatine Hill under the so-called Basilica of Domus Flavia, but in fact it is an environment realized in earlier times as the original rectangular shape was also resected along the minor sides by the foundations of a tub of Nero's Domus Transitoria. the scholars for the type of frescoes date it around 30 a.C .; the dating and the position (adjacent to the cryptoporticus) can make acceptable the hypothesis of an environment annexed to the house of Octavia in which they were hosted characters certainly devoted to the Egyptian cults. The hall is frescoed with typical subjects of the cult of Isis recurring in the ribbon-like decorations and in the iconography of the figures that decorate the walls and the ceiling; this room was also originally hypogean and was almost certainly used by Caligula.
In the first period after nomination to Emperor, Caligula didn't show particular inclinations, and indeed he was the Germanicus heir, perhaps the most loved of all generals of the dynasty, that the people loved also and from which the Senate expected the return to a more democratic power management. After the serious illness that struck him just a few months later and he surpassed unexpectedly, a new Caligula manifested his world vision and of himself. He felt the representative of the gods and god himself to the point that, as Svetonius tells us, he built a temple for himself with a golden statue to which food offerings had to be made daily ...