Discovered a mysterious building on the Tiber banks 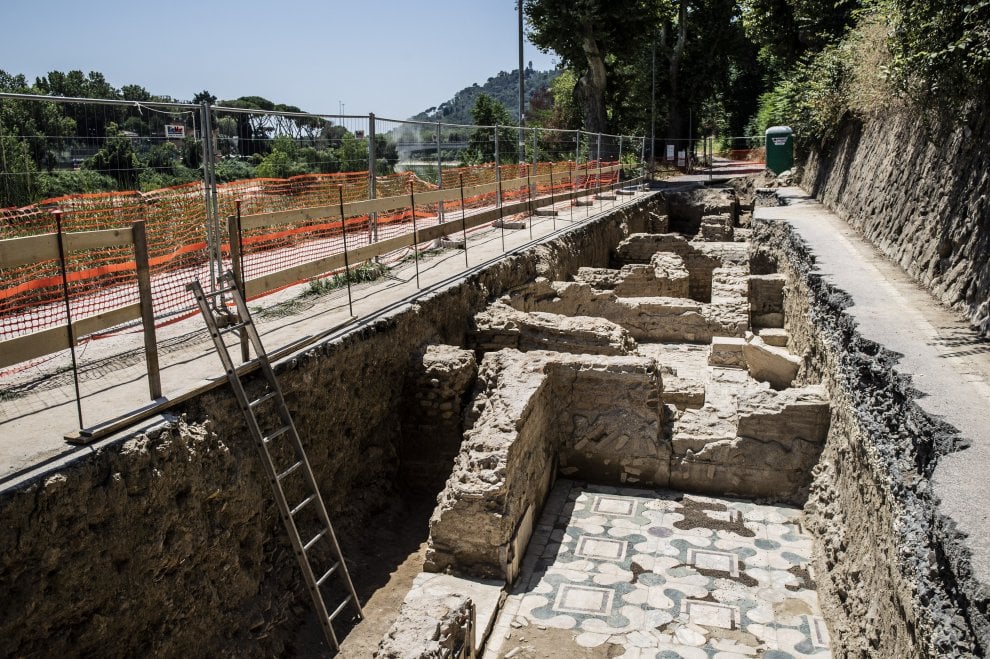 Some rooms of the late imperial age with splendid floors in opus sectile have been found along the banks of the Tiber, near Ponte Milvio, In the spring of last year, during works along the Tiber cycle path, in the area of the Foro Italico in the direction of Ponte Milvio, the workers removing the earth suddenly saw what looked like a floor mosaic. The person in charge of the Superintendent, that is present at every work in the subsoil of Rome, reported the discovery but the archaeological excavation took some months to carry out to light the building whose rooms have been inhabited continuously by the 1th to 4th century AD.
The excavation revealed a stratification of the environments that in the first century AD they were considered relevant to warehouses, while afterwards on their foundations very different environments would have been built. Four rooms have been excavated so far: an apsed hall with a rectangular room next to it and two circular rooms on whose function of use the archaeologists reserve the right to advance hypotheses at the conclusion of the study of the materials found.
The apsidal hall according to archaeologists would suggest a place of Christian worship, even if at that time in the houses of the rich the stibadium was widespread, a semicircular table usually placed in an apse where the cenatio was consumed. Even the two mysterious circles could be relevant to a suburban villa and belong to the balneum. There remains to be explained the four burials found at the same level and therefore dating back to the same period, but the very small number does not suggest a cemetery as a small private mausoleum. Along the right bank of the Tiber, starting from the August age, it was a succession of beautiful suburban villas with their horti and from literary evidence we know that if there were villas of the imperial family along the Tiber in front of Campus Martius, from the horti Caesar under the Janiculum to the Horti of Agrippina in the area of the Vaticanus ager and beyond along the bend of the Tiber passed Ponte Milvio in the direction of Rubrae, where the poet Publius Ovidius Naso had his villa, were many patricians who had residences suburban on the right bank.
The set of excavations conducted on the right bank of the Tiber from which emerged large complexes starting from the villa of Livia along the Flaminia to that of Lucio Vero to the fifth mile of the consular Cassia has repeatedly confirmed how these areas were frequented by the aristocracy Roman from the first century BC until at least the entire 3rd century AD The characteristics of the environments discovered near Ponte Milvio now lengthen the time of attendance at least until the fourth century.
This finding seems to confirm the conviction of Gaetano Messineo, an archaeologist who has studied for many years the archaeological area between the Tiber and the consular Cassia and Flaminia: "The heights on the right bank of the Tiber closest to the river would have presented already starting from Tor di Quinto up to the Transtiberim (ed: Regio XIV in urban area) an arrangement not unlike that of the crown of suburban Horti around the city".
The excavated areas will remain open and visible even to the visitors of the cycle path until the beginning of autumn when to avoid damage due to rising water they will be temporarily covered. In the next spring the excavations will be resumed more extensively.