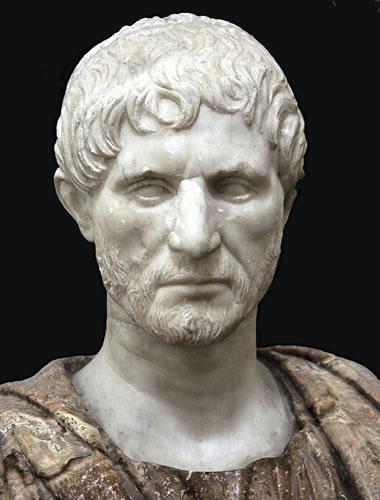 He was the founder of the Roman Republic and who led the revolt of the people and the Senate of Rome against the Tarquini and, after their expulsion, was the first one of two consuls of Rome. He was born in 545.C. by Marcus Junius, a descendant of one of the companions of Aeneas, and Tarquinia, the daughter of Tarquin the Elder and sister of Tarquinius Superbus; as with all members of family of power his history was also one of violent deaths, in fact the king had killed his father and elder brother Marcus Junius to dispose of their property. The young Lucius Junius, became orphaned and alone, to save himself began behaved in a foolish way earning his cognomen "Brutus" which means "fool".
Tarquinius, considering him harmless for his stupidity, took Brutus into his family and made him grow up with his sons Titus and Arrunte (also known as Sestius). He was following them when were sent by their father to Delphi during, what historians consider, the first diplomatic mission of Rome outside of Italy.
This event is the confirmation of the deep bond that the Etruscans, as were the Tarquins, had with the oracle at Delphi where we went before began a new business. Legend, that bring both Livy has it Dionysius of Halicarnassus, he said that the Pythia oracle had predicted that the new king of Rome would be one who returning would kissed his mother to first one; Tito and Arruns agreed to kiss her mother together so that you would divide the kingdom, but Brutus who was present to the oracle, just returned to Rome pretended to stumble and kissed the ground, whom considered his mother.
So far the legend; in reality there is no evidence of the presence of Brutus on that trip and the whole story takes on a symbolic value. Rome at that time was a town of 35,000 inhabitants and ruled over a territory of about 800 square kilometers and wanted to conquer the surrounding territories; was starting a big change after which its sphere of influence would have crossed the borders of Latium and of the Italian peninsula and so his new foundation had to be sanctioned by the authority of the Oracle of Delphi to which they addressed all the peoples of the Mediterranean, those who Rome would then dominated.
The life of Lucius Junius Brutus continued like that all vires romanos, got married and had children, but above all he was a warrior of Tarquin army and when the king lays siege to Ardea he was with his troops. He was part in the same cohort of Tarquinius Collatino and when the wife of this, Lucrezia summoned him, it was precisely Junius Brutus to accompany him to Collazia. He witnessed the confession of Lucrezia and her suicide and he could not endure further the abuses of the king and his sons: in front of lifeless body of Lucretia vowed to liberate Rome from violence and abuse of the Tarquins; so Livy reports his oath:

"On this pure blood before a prince contaminate it, I swear, and I call you to witness, oh Gods, that from here onwards will pursue Lucius Tarquinius Superbus and his wicked wife and all his seed with fire and sword, and by any means I can, and I will not allow that neither they nor anyone else reign in Rome nevermore" ...