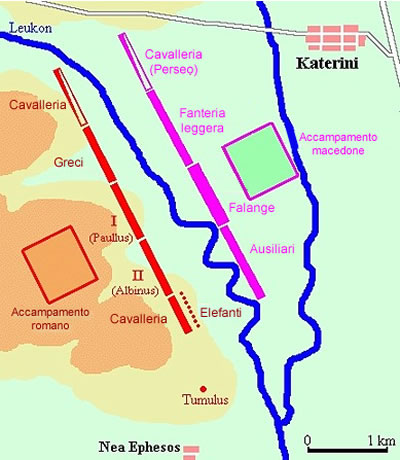 The battle of Pidna, fought in 168 BC, was the decisive battle of the third Macedonian war and the epilogue of the confrontation between Rome and the Kingdom of Macedonia of which it marked the end. Some facts make this battle emblematic and unique; its short duration of just two hours, the comparison between two military strategies and two different fighting techniques, the environmental and natural factors and above all the consequences for the geo-political structure in the Mediterranean basin.
The day of the Pydna battle is remembered today as June 22 of 168 BC, at the beginning of summer but in the first reports a different date was indicated; according to Titus Livius, the year was 594 Ab Urbe Condita and the month was September; the difference of more than 60 days is given by the non-alignment of the Roman calendar before the adjustments made by Julius Caesar. The identification of the exact day of the battle was also facilitated by the news, witnessed by many historians and annalists, that on the day of the battle there was an eclipse of the moon, interpreted as an omen of the clash outcome.
On the night between 21 and 22 June the soldiers saw that in the sky the Moon seemed "devoured" by evil, so much so that it was said to be "Luna laborat" to free itself from the evil influences that tried to devour it and, as Pliny recounts, the soldiers according the custom "began to beat bronze objects and raised embers and torches to the sky in large quantities" to help the Moon to banish the evil spell. It was then that Sulpicius Gallus intervened and explained to them it was a natural phenomenon and was not a bearer of any omen, thus restoring peace in the camp and hopes for success.
Pydna was a coastal town in Thessaly, facing the Gulf of Thessaloniki long disputed between Athenians and Macedonians until it was annexed by the latter. Here Perseus had set up his army camp after the retreat forced by Publius Scipio Nasica, lieutenant of Lucius Paulus Aemilius, who with a contigent of 8,000 legionaries, 200 Cretans and 1,200 knights, had routed the Macedonians who waited in the mountain camps thus depriving Perseus' army of the forces of its rear.
In the clash in question the armies were led respectively by the Roman army by the consul Lucius Aemilius Paulus and the Macedonian army by the king Perseus; the great interest that historians have for this battle derives from the comparison that took place between two different ways of "waging war", between the Macedonian phalanx and the Roman legion.
But in this battle there is also another peculiarity, the episode from which the clash began, that seems to have been completely random. Titus Livius (Livy) in Ab urbe condita tells that both the Roman consul Lucius Aemilius Paullus and the king of the Macedonians faced each other with their armies placed on the heights of the valley of the river Elpeus without deciding to clash when an insignificant episode started the battle.
In the Roman camp it was the early hours of the afternoon when Italic legionaries - Ligurians, Marrucians, Paelignans - and some Samnitians knights were allowed to go and supply water to the Elpeus river which flowed near the camp; at the same time, Thracian soldiers on the opposite bank had also come down to supply water.The two groups of men controlled each other as they filled the containers when the unexpected happened: one of the donkeys used to transport the provisions of the Roman army escaped to his guardian to go to drink at the river, then instead of returning he crossed the river heading towards the camp of the Macedonians. Tres romanorum militum had immediately gone in pursuit to retake the donkey which in the meantime had been captured by two Macedonian soldiers; the Romans crossed the river and clashed with the Macedonians on whom they were right and took the donkey back; when the other Macedonians saw the comrades defeated and wounded, they pursued the Romans who, now near their camp, called other legionaries to get help :Post hos alii accesserunt, postea iterum alii, donec universus hostium exercitus movit proelium inferre.