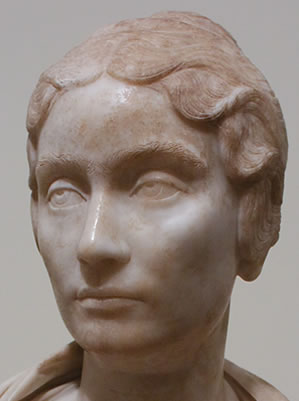 She was born in Rome on May 21, 120 BC, daughter of Lucius Aurelius Cotta who was consul in the year after hers birth; the mother was called Rutilia and even her family was of consular rank. The gens Aurelia had cognomina Cotta, Scaurus, and Orestes and, in the first century, a branch was called Fulvus, to this belonged Titus Aurelius Fulvus who became emperor under the name of Antoninus Pius.
She married very young Gaius Julius Caesar, who was twenty years older than she, and they had three children: Julia the Elder. Giulia Minor and Julius Caesar. When she entered between the Julia gens, that did not yet have same political significance of the gens Aurelia that had between the ancestors the Gaius Aurelius Cotta who had celebrated a triumph for having defeated the Carthaginians at Lilybaeum and Trapani and was the magister equitum during the dictatorship of Caius Duilio in 231 BC. Aurelia maintained strong ties with her family to whom she did not hesitate leaning to give a chance to her young and ambitious son, Julius Caesar, to make a career. It was under this influence that she made assigned to young Julius Caesar the post of the Flamen Dialis that had been of his brother Gaius Aurelius Cotta died suddenly.
About Aurelia does not have much news but she was certainly a Roman matron of exemplary virtue and significant influence that resulted from the positions that the gens Aurelia had into Roman politician organization.
He was certainly a highly intelligent and careful woman who knew how to support the ambitions of the young Julius Caesar; political and social conjunctures were particularly favorable to the ascent of the young son who had to moving in the difficult climate of social war but she, certainly, knew how to take advantage him of the relationship who were with the two chief antagonists Marius and Sulla who were both her brothers in-laws having married respectively Julia the Elder and Julia Minor the two sisters of her husband Julius Caesar.
The whole family had sided with Gaius Marius when he was the great hero who triumphed over the Cimbrians, but when began the disagreements between Marius and Sulla the young Julius Caesar sided with Gaius Mario who died a few months before his father. When her husband died in 85 BC Aurelia remained living in the Suburra house together with his son fifteen yearst son, who a year later would marry Cinnilla whose family was plebeian, and this fact was opposed by Sulla now become unchallenged master of Rome. Aurelia was primarily the mother of Julius Caesar, he protected his house and his choices; when Julius Caesar refusal to obey Sulla and would not divorcing Cinnilla was the mother and his uncle who urged the dictator because there was not condemnation for disobedience.
Julius Caesar hid for a time in Sabina then, reached the right age, he began his military career serving in Asia. In Rome he had left his young wife Cinnilla entrusted to the protection of Aurelia who stayed by the daughter in law during the long years of separation of Caesar who returned to Rome after the death of Sulla in 78 BC.
She was present when in 76 BC was born the first and only daughter of Caesar, Julia, as it surely was near Cinnilla when a difficult childbirth caused her death and that of her child. Little Julia stayed with the grandmother who took care of her education in the long years during the father performed his military duties away from Rome ...