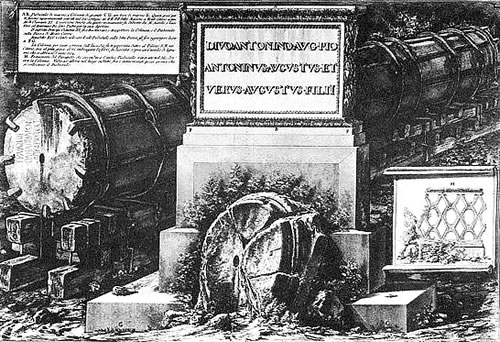 In the tenth century there were many pilgrims who for fear of world ending in the year Thousand went like penitents in St. Peter, but among them were also men who were only in the Campus Martius near the Mons Citorio because there was a bronze statue on the base of which was written "Hic percuote", strike here.
Some believed that the statue represented Julius Caesar, Augustus others, because it was not far obelisk that served as the gnomon of the sundial that the princeps had built. During the day, many pilgrims and adventurers, mercenaries and common people, they passed near and continued on their way, throwing only fleeting glances but as soon descended the dark shadows roamed around the statue and struck with bats and stones the statue, so that was scarred and open in several parts, in search of the treasure of Octavian Augustus.
It did not know who had leaked the story of a huge treasure that just Augusto would bury at that point of the Campus Martius; the story of a great treasure was born surely from the known fact to everyone that Augustus was the richest man who ever lived.
The legend of the treasure buried in the Campus Martius was told by William of Malmesbury, a Benedictine monaco who was the librarian of the Abbey of Malmesbury, who had found a text in which he told the story Gerbert d'Aurillac, a Benedictine monaco and also scientist who came into possession of a book of magical practices to which he would often use to get even to the throne of St. Peter.
The real story, however, is somewhat different. According to Arturo Graf, a scholar of the Middle Ages, the legend was born from a work written by Adalberon, bishop of Laon in Piccardi who after helped with Gerbert then bishop of Reims accession to the throne of Hugh Capet, began to clash with him probably because of the career that took him after Reims in Ravenna.
The text of the story is probably one written by Benone that had been made cardinal by an anti-pope and to whom we owe "Vita et gesta Hildebrandi", an angry pamphlet, which is common to Gregory VII also Gerbert accusing him of having conversations with the devil which he would make the pacts by that had magical powers that allowed him to do things which are impossible with others.
The legend is powered by inventiveness of Gerbert who had transformed the sundial in Magdeburg mechanical watch and then built the sundial of Reims and then to Ravenna and which revolutionized the measurement of hours from the canonical or temporariae became all the equal duration with the introduction of the polar gnomon; this was the great insight of Gerbert d'Aurillac who would become Pope Sylvester II, the Pope of the year Thousand.
Just with magical powers it was said that Gerbert had solved the mystery of Augusto Treasury or at least we went very close. The story told by William of Malmesbury wants Gerbert as he was going to St. Peter and passing as the pilgrims in the Campus Martius saw the poor statue horribly ruined by countless seekers who had struck, he saw the writing but instead stopping at the first meaning of "Hic percuote" Gerbert thought might be another "Hic per caedere" which can also mean "Here fall inside". If it was, then there must be another clue and in fact the statue had a finger pointing in one direction and indicating a place that, however, as indicated by the written and diachronically with the Latin lemma occido, i = to set, could only be seen at sunset ...