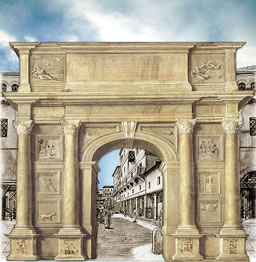 Along the Via Lata until the XV century there was a commemorative arch it was called Arcus Maior but in ancient Rome it was called Arcus Novus to distinguish it from the Arch of Claudius that was also on the way that the legions gone along when they came from the northern provinces. It was a monument erected in 303 A.D. by the Senate to celebrate the Decennalia of Diocletian, it was located on the first stretch of Via Flaminia before the gate of the Aurelian Walls.
We do not have designs that provide indications about its features but certainly you can consider it an archway with a single fornix whose essential elements were the passage delimited by pillars and by vault and the upper block was going to be the attic that could also be surmounted by statues.
Since crossing the Via Lata, it was certainly an two-faced arch but as it was involved in a very built-up area, it was definitely leaning to the buildings that lined the street, among others were discovered the remains of a b,uilding over 100 meters long, certainly an horrea, on the Via Lata (visitable from the Church of Santa Maria in Via Lata) where the arch there was.
Historians disagree as to why it was built, in fact, some people believe that it was to commemorate the Triumph that Diocletian and Maximian had celebrated in Rome right in 303 AD, but everyone agrees that it was made of bare materials from other monuments .
This practice had spread since Rome was no longer the only capital and thus were no longer artistic competencies able to produce works like those of the past; the best artisans and the skilled workers already had moved to Constantinople the new capital of the Empire.
Nell'Arcus Novus were reused materials from two commemorative monuments of the Julio-Claudian gens and similar the Ara Pacis Augustae: Ara Pietatis and Ara Gentis Juliae. We know for sure that it was decorated with bas-reliefs from the altar of Ara Pietatis and that two pedestals of columns decorated with Wins, barbarians prisoners and the Dioscuri probably came from the Sun Temple which was built by Aurelian.
The arc is mentioned in Notitia Urbis Romae of the fourth century. as Arcus Novus and Oriental monks of St. Ciriaco built there alongside a deaconate; in 1037 it was called Arcus Maior and was also support for the apse and the sacristy of the Church of Santa Maria in Via Lata, already built in the X century, over the old convent, which at the time was oriented towards the south.
The arch in 1280 was partly fallen and finally in 1491 the Pope Innocent gave the order to demolish it; the demolition took place to allow the reconstruction of Santa Maria in Via Lata that from a simple deaconry was transformed into a worship place.
Testimonies of the demolition will have in Stephen Infessura diary: