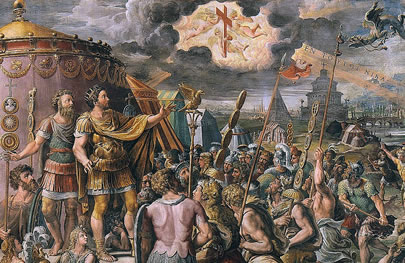 In the IV century A.D., at the intersection of the Via Flaminia with the road, which no longer exists, that linked Capena with Vejo was erected almost certainly an arch to celebrate Constantine's victory in the battle of the Milvian Bridge in 313 A.D. The battle began at Prima Porta, and ended with the defeat of Maxentius at the Milvian Bridge; The arch was built in the same place where, according to legend, was the camp of Constantine who here had a vision of the cross.
Archaeologists date the monument to the III-IV though. A.D. for the building technique used that is similar to that in the Basilica of Maxentius, both because in the arch there is a tile brings stamped the inscription "OF CR AUG ET CAES NOS" that meaning from the furnaces of CR Augustorum et Caesarorum nostrorum therefore of tetrarchico period it lasted only 10 years from 295 to 305.
The arch was quadrifons and was built on 4 pillars with cementitious wall that formed inside a cross vault, the foundations are in travertine blocks, the walls on the outside with brick bipedales divided in two on the diagonal and arranged the tip inside; the arch was then covered with slabs of marble or travertine and adorned with statues and columns; He had a rectangular plan with the longer sides on the side of Via Flaminia.
Over the centuries the arch has undergone many changes: there are no reports of its use in the Middle Ages, but in 1263 was part of the village of St. Nicolai de Arco Virginis and therefore probably used as a church; in the XV century it was transformed into a fort with a boundary wall around, in the XVI century it became a taberna with ospitium for pilgrims and as such is indicated in the maps to get to Rome. In the XVII century it was abandoned for a period and occupied by robbers and since has been referred to as Malborghetto; in the XVIII century, the Chapter of St. Peter, the owner of the fund, rented it to the Pontifical Mail that there made a post station between Prima Porta and Castelnuovo di Porto, in 1892 it was bought by the Italian State and restored. It now houses a museum: interesting the ground floor where are in exhibition some headless statues from Grottarossa area and funerary altar found in Tor di Quinto near Milvian Bridge .
The arch without the brickwork on the fornix and the additions of later times had to appear very similar to graphic reconstruction that was carried out in the XVI century by Giuliano da Sangallo.
The arch appears today as a massive building in the country; from the outside you see on the facades of the four arches made by bricks the string courses in travertine and a few decorations. You enter from the east side opposite the road, and a wooden staircase leads to a mezzanine floor environment under the cruise, here the structure is still the Roman uncoated. A star left down to the ground level slightly higher than the Flaminia which a paved stretch north has been discovered. The rediscovery of the Arch of Malborghetto is due to a young archeologist Töbelmann who , at the beginning of the twentieth century, studied it for a long time ...