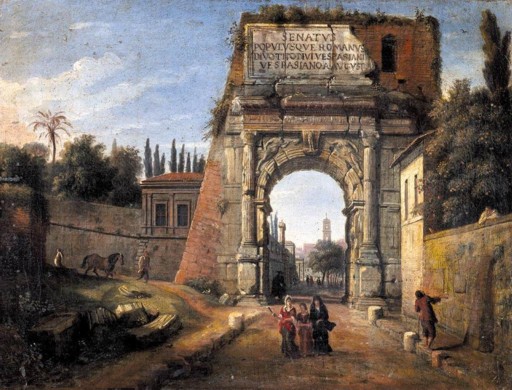 The Arch of Titus is one of two arches of the Roman Forum still intact. The other is the Arch of Septimius Severus that with the Arch of Constantine near the Colosseum and the Arch of Gallienus in Esquiline are the triumphal arches still visible and substantially intact in Rome.
Is situated on the top of the Via Sacra Summa where once there was the saddle that joined the Palatine to the Velia.
Triumphal arches, as clearly indicates the name, were raised in honor of the prince, the console or the general who had expanded the territory under the dominion of Rome and many were those that were built in Rome according to a custom already begun in the Republican era: there was the arch of Scipio, the arch of Fabianus, the arch of Augustus, the arch of Tiberius, the arch of Claudius, of Drusus and others that have disappeared over the centuries.
The Arch of Titus is the oldest of all arcs of Rome that we can still admire and are believed that might be saved because it was incorporated into the walls of the Fortress of Frangipane family in medieval times.
In 1807 a traveler like Madame de Stael thus described the arch:
"At extremity of the Palatine rises a beautiful triumph arch dedicated to Titus for the conquest of Jerusalem. It is said that the Jews who are in Rome do not ever pass under this arch, and it shows a path that they take to avoid it. It's to be hoped, for the honor of the Jews, that this anecdote is true: long pains agreeded to great misfortunes".
The Arch of Titus has a high symbolic value for the Jewish people: it is a triumphal arch that reminds everyone of them the beginning of the Diaspora, and even today many Jews there do not pass below for not honoring the ancient conquerors.
To Tito was recognized the triumph of his victorious campaign in Judea where were recaptured the cities that had rebelled in Rome and was destroyed the Jerusalem Temple. The triumph of Titus was celebrated in 71 A.D., while was Emperor Vespasian his father, but the Senate decided to build the Arch after his death in 81 AD; It is presumed to have been completed in 90 A.D. and it was inaugurated by Domitian, his brother.
The arch was definitely built with the Temple of Jerusalem spoils, as well as the Flavian Amphitheatre; This fact is documented by an inscription found in 1813 inside the arena saying:

The Arch of Titus, with its reliefs depicting the arrival in Rome of the winners loads of booty in the Jewish War, with the Coliseum are monuments to the victory of the Romans, and at the same time to the tragedy of their victims.
The architecture of Titus Arch expresses the evolution of Roman art than Hellenistic models.It 'an arc with a single fornix, which now shows the foundations suspended due to an excavation in modern times occurred in order to bring to light paving of the Augustan period. The arch is high m. 15,40, wide m 13.50 and deep m 4.70, it is coated with greek marble Pentelic and supported by four semi-columns on the four sides; the fornix is high m. 8.30 and wide m. 5.36.
The structure, simple and harmonious, has two innovative elements: the column placed on a plinth and composite capital, ie Corinthian and Ionic.
The original DEDICATIO is located on the side facing the Colosseum and says: ...